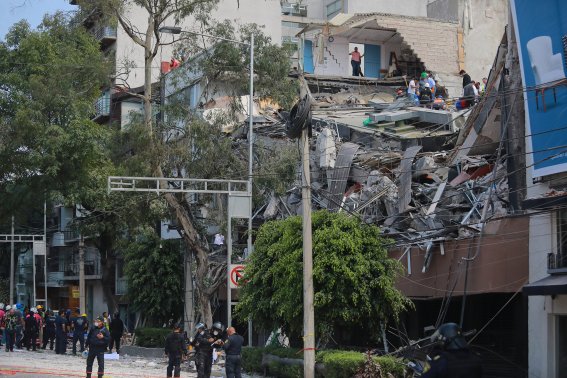 “You already know enough. So do I. It is not knowledge we lack. What is missing is the courage to understand what we know and to draw conclusions.” Sven Lindqvist.

If you’re not Mexican and you’ve lived in Mexico City, you’ve probably lived or hung out in La Condesa, with its tree-lined avenues, pavement cafes and energetic night-time economy. My wife and I recently spent a wonderful year (May 2015-May 2016) living in a 3rd-floor apartment on the corner of Calle Campeche and Calle Cholula, above a branch of the taco chain Tizoncito. Having seen the destruction around Avenida Amsterdam, just a very pleasant three-minute stroll or two-minute jog away, I hope our former home is still standing and that everyone who was in the building is safe and sound.

I experienced three small earthquakes in my time in DF (the most common local name for the city). The first time I didn’t notice, or at least I saw belatedly on Twitter that there’d been an ‘#alertasismica’. I subsequently tried to find out if the public alarm system had actually worked, because I certainly hadn’t heard it. The second tremor apparently took place while I was in the metro one afternoon – I only heard about it in retrospect. The third one took place during our farewell party. As about 20 or so of us bounced round our ultimately oversized apartment at 3am, someone pointed out that the lampshade seemed to have joined in with the manic dancing. Sure enough, when we went to peer over the balcony, the staff and straggling customers of the taco joint were gathered in the street looking a bit chastened. Ah, chingale, we thought, and went straight back to ‘Born Slippy’. It turns out that we were immensely lucky.

By far the strongest and longest earthquake I’ve felt wasn’t actually in Mexico. It took place in Rome a few months after we’d left DF, on the eighth floor of the maternity hospital where my wife would just a few weeks later give birth to our first child. We were visiting a fellow couple and their brand new baby when the water in a plastic bottle began to shake, and then the building began to wobble. Everyone went quiet – I think that was one of the uncanny things about it. Outside, down in the street, some people were gathered in small groups and others were just getting on with their lives. It seemed to go on for several minutes but afterwards the sensation of physical distress and disorientation went on for more than a week. I immediately felt inspired to write this short piece of absurdist satire in an attempt to turn my fear into something…useful? Meaningful?

The stories I’ve read in the media and posted by friends in the last few hours are genuinely shocking. By no means do I want to make a disaster I didn’t even experience about me, but knowing those streets and recognising some of the buildings, not to mention worrying for the safety of friends who still live nearby, has been a sobering experience. There have also been reports of acts of immense courage. For all its manifold cracks and faults, I felt that Mexico City is a place in which those who share space look out for one another to a greater extent than in both London and Rome, especially given the relative absence of the State. Events like this, and those in Florida and the Caribbean over the last few weeks are not a good advert for cutting back on the provision of centrally-funded emergency services.

The courage that ordinary Mexicans display in continuing to make do in the midst of constant dangers, big and small, from disappeared daughters to bent traffic policemen, is immense. Partly by virtue of living in Condesa, we were sheltered from so many of the threats that chilangos take for granted. I hope that if I were still there I’d have the bravery and integrity to help out. It’s becoming clear now that, wherever we live, the rest of our lives now will both trigger our instincts of self-preservation and also necessitate acts of great selflessness. I pray that incidents like Brexit and the election of Trump are not conclusive evidence that the two are mutually opposed.

Although I’d be hard-pressed to compare it to dragging people put of broken buildings, it did take something like courage to investigate something I’d purposefully been avoiding: the relationship between earthquakes and the changing climate. This article, by the highly-respected academic Bill McGuire, sets out the link. It turns out that as the planet heats up (and particularly as deeply-compacted ice melts, and hurricanes hammer at the surface), the earth shifts. (Incidentally, if you haven’t read the article, which was published in an eminently reputable publication and summarises the results of some very extensive research which took place over several decades and was subject, like all significant academic research, to extensive and rigorous peer-review based on the systematic application of doubt, please do not comment below.)

It’s immensely difficult to talk about climate change. We’re neither evolutionarily equipped nor socially encouraged to take it seriously. The most powerful forces on the planet employ endless legions of trolls to shout down any discussion of its causes and effects, often in the name of (ahem) “free speech”*. Republican and Conservative politicians insist that it’s never the right time to address planetary overheating, particularly at those moments when its consequences are most visible and stark. Anywhere I post this online there will immediately attract those who, without having digested or even nibbled at its contents, will insist on screaming with spluttering toddler-like outrage that someone has had the temerity to try to feed them the C-words. Their campaign of intimidation around an almost impossibly intimidating subject has made climate change into a taboo, a heresy.

Now, in 2017, everyone – particularly politicians and journalists – who talks about hurricanes without mentioning the changing climate is being cowardly and dishonest. We also owe it to each other, and to the new generation, the one which, absolutely blameless, is already here, to face up to the fact that our failure to even discuss the dangers before us has much deeper consequences than we blithely assumed. An essential step is to get rid, by any means necessary, of those ‘leaders’ who, by means of scapegoating and by encouraging inane conspiracy theories, deny reality on our behalf. They are the sort of people who should have hurricanes named after them: #HurricaneRickScott or #HurricaneScottPruit may have had more useful political impact than #HurricaneIrma. Perhaps, given his government’s stated intention to throw limitless amounts of fossil fuel onto the fire, this particular disaster should go by the name of Enrique Peña-Nieto.

* Such people specialise in belittling the suffering of anyone with darker skin, so climate change is an ideal topic for their trolling.

What I’m trying to do on this site is make links between things I haven’t seen connected together elsewhere*. Hence the links themselves are usually more important than what I have to say about them. In the last couple of days I have come across three things which I think vindicate (albeit, inevitably, in an infinitely more coherent and detailed fashion, one based on research and careful thought rather than guesswork and ‘affect’) the thoughts I’ve been trying to articulate over the past few weeks. First there is this article by Carole Cadwalldr which details the ways in which right-wing trolls have been able to infiltrate the algorithms of Google and Facebook in order to create their own reality, one which is increasingly conditioning ours:

The technology that was supposed to set us free may well have helped Trump to power, or covertly helped swing votes for Brexit. It has created a vast network of propaganda that has encroached like a cancer across the entire internet. This is a technology that has enabled the likes of Cambridge Analytica to create political messages uniquely tailored to you. They understand your emotional responses and how to trigger them. They know your likes, dislikes, where you live, what you eat, what makes you laugh, what makes you cry.

END_OF_DOCUMENT_TOKEN_TO_BE_REPLACED

I wanted to write about the new US President’s decision to stop NASA conducting research on the earth’s climate, but word fail me, or maybe I them. Where to begin? It’s too depressing to even link to. It would require a command over language which I don’t possess. Maybe poets and other artists are better placed to develop the new forms of expression which will be able to address this new reality. Or perhaps I should get round to watching ‘Hypernormalisation’. Here are three writers who have tried to think through the topic (more or less) head-on.