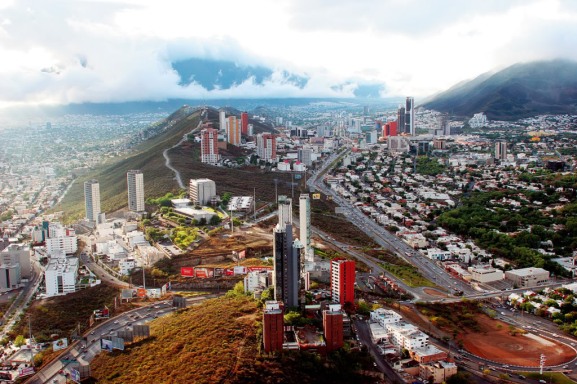 There is a line in James Joyce’s Ulysses in which Steven Dedalus lists the central elements of the British empire: beer, beef, business, bibles, bulldogs, battleships, buggery and bishops. A similar list for the city of Monterrey, situated as it is within what Ed Vulliamy has called ‘Amexica’ — the badland borderzone encompassing Northern Mexico and Southern Texas — would certainly include the first two, along perhaps with business hotels, broad-brimmed hats, bullets, big cars and black gold.

Certain cities, particularly in this part of the world, are designed more for cars than for people. To get safely across the road from the hotel to the pharmacy to try to get hold of some wax earplugs in case I need to block out the sound of the traffic at night takes me about ten minutes of very hard work. It would be quicker to take a taxi. The highway is lined with the kind of restaurants in which the quality of the parking is valued much higher than that of the food — in Mexico, that means Chili’s, PF Chang’s, VIPs, El Portón, the ineptly named Italianni’s and other establishments which specialise in very generous quantities of meat (generous, that is, to the human diner, not to the animated being which provided the food). The whole thing would make for a refreshing antidote to anyone suffering from optimism about the ability of human societies to cut carbon emissions any time soon, or to adjust their diets to make them more sustainable and less cruel.

There seems to be a growing consensus on social media that the ‘environmental problems we are facing’ (this is starting to sound like a euphemism) are caused not by cars, but by cows — not fossil fuels, but farting. I suppose that becoming vegetarian is, although highly laudable, easier than addressing one’s over-reliance on motor transport and the products of petrochemical innovation. Many years ago I happened to be stepping out with a plastics engineer, and it occurred to me to ask her something which had never crossed my mind before: what is plastic? Plastic, she explained, evidently confused and embarrassed that someone with whom she was closely and publicly associated could be so very ignorant, is derived from petrol. The computer I am using now is made of petrol. This may not be news to you, but for me back in 1999 it triggered a traumatic memory of my total confusion as a child upon being told that glass is somehow made of sand. As it happens, between them petrol and cows account for a very high proportion of the increasingly limited natural resources we depend upon every day, and it wouldn’t entirely surprise me to find that the enormously successful documentary ‘Cowspiracy’ had been helped into existence by forces determined to protect one of these industries at the expense of the other.

I’m not sure how much methane gas deer produce but I do catch a glimpse of one or two (it is hard to tell the difference, unless you see them together) at the private university I visit for the afternoon. It’s a pleasant place to walk around, perhaps a bit too pleasant in fact. I feel a bit like I’m on a set where an advert for a private university is being filmed. Everyone is very shiny and extremely young, they all seem to be studying Finance, and unlike everywhere else in Mexico I can see no mention of the number 43. It’s the diametrical opposite of a escuela normal. Of the exam candidates I interview several have come up from Tampico, somewhere I hope never to visit, and may well not, given that the organisation I work for stopped doing exams there two years ago in case their examiners got shot (not necessarily by the candidates, but you never know). As he booked into his hotel on his last visit there a colleague of mine was advised to stay away from the windows por si acaso.

On the way back to the hotel the taxi driver warns me we’re in for a pretty wet evening (I don’t think he’s flirting). I always learn a lot from taxi drivers; in South Africa on honeymoon last year we basically covered the main points of a Master’s course on race, society and politics just by talking to the people transporting us around. Here in Monterrey taxi drivers are very used to gringos, especially ones that don’t speak a word of Spanish, which I presume is why several of them a) repeat the same things to me in slow Spanish and broken English while gesticulating wildly in order to indicate difficult words like ‘hotel’, and b) try very hard to rip the fuck out of me. In Mexican Spanish (and possibly in Venezuelan and Patagonian Spanish too, I don’t know) people use the phrase ‘ver la cara a alguién’, to see someone’s face, meaning to rip someone off*. There is of course little I can do to disguise my cara de gringo, which means one taxi driver tries hard to sell me some prostitutes, and then when I express a strong lack of interest in that, a trip to some waterfalls instead. So not just a taxi driver then, but a pimp tour guide taxi driver. Triple jobbing. This kind of abuse gets so ubiquitous and annoying that I end up sitting silently in the back and wondering whether I should give up, sell out and start using bloody Uber.

Thankfully, however, my faith in cab drivers is restored by Agustín, an enormous and enormously tattooed twenty-something whose car is adorned with disco lights and tiny skulls and soundtracked by some sort of surprisingly catchy death metal music. He tells me an entertaining tale about how one of his neighbours out in the suburbs was shot dead this very morning by another neighbour, who at the age of 14 is hooked on some sort of fairly unpleasant-sounding but certainly very more-ish glue/crack concoction**. Some people are desperate for money — as I leave for the airport one taxi driver drives in front of another, jumps out and grabs my bag, puts it in the trunk and drives me off at top speed. He then conducts a furious argument over the radio with the first taxi driver over the fact that he has just stolen a clearly lucrative customer. I can see how things can turn violent. Given the level of barbarity involved in the drug trade, it seems likely to me that the taxi business must have some cartel involvement, and it’s obviously not the only one. In August 2011 a group of comandos belonging to the particularly vicious Zetas gang raided a casino which wasn’t paying its dues***, in the process burning it down and killing 53 people****. This brings the death toll for this short series up to almost a hundred, and we haven’t even got to Torreón yet.

Nevertheless, most of that was a couple of years ago, and now Monterrey is officially much safer than it used to be. Hopes are high that things will continue to improve. A lot of those hopes have been invested in Jaime Rodrigues Calderon, aka El Bronco, the new State Governor of Nuevo León, who is the first ever to be elected without the support of a political party. His campaign is already being talked about as a masterpiece of political marketing strategy — on the way to the airport in DF I passed a billboard advert promoting the man credited with his success. It really is a remarkable achievement, given that Calderon has never been associated with any political party, neither the governing Partido Revolucionario Institucional, nor the opposition Partido Acción Nacional (in Mexico, rather like in Ireland, with whom its political system has rather a lot in common, the two main parties are even more corrupt and right-wing than each other). He has always stubbornly insisted on remaining outside the established political networks as a matter of moral principle, free from the influence of what former-and-future failed presidential candidate Antonio López Obrador has labelled the ‘mafia of power’. All, that is, except for one brief 31-year period in the PRI. Sorry? Yes, right, there is that. El Bronco was in the ruling PRI for 31 years, until September 2014.

Orale. That fact may help to explain why the newly-elected independent Governor has recently gone on the attack against that self-same Obrador, the left-wing candidate who just happens to be the PRI’s main bugbear. He has also distinguished himself not only by telling the families of people kidnapped by the State and by the State’s close friends in the drug gangs to shape up and face up to the fact that their kids are dead, while also blaming the mothers of the disappeared for not having done more to keep their kids in line, given that, as he puts it, they must have been got rid of for some reason. He’s started to sound a bit like one of his good friends, former President Carlos Salinas de Gotari, who is regarded in Mexico in much the same way as Fernando Collor de Mello is in Brazil or Charlie Haughey is in Ireland. All this has led some sage observers to the eminently reasonably conclusion that he is being maneuvered into position for a pop at the 2018 presidential race as a secret PRI candidate. He’s definitely got better intellectual credentials than the current office holder — when EPN was asked to name a book which had inspired him, he was famously unable to name a single one that he’s even read, whereas El Bronco says that this classic of national literature is his own personal favorite.

Speaking of books, at the airport bookshop I come across a newly-published book about the current state of Mexican politics — it’s called The Authoritarian Return of the PRI.

Nevertheless, the state of Nuevo León certainly has a lot of very attractive scenery, with some very oddly-shaped mountains dominating the skyline, containing some beautiful waterfalls, and probably more than a few prostitutes. One night I do manage to get out for a look around, ending up in Monterrey’s flagship restaurant, Rey de Cabrito, eating goats in a room decorated by goat heads next to a table on which two of my fellow diners are sporting goatees, which seems to me a bit risky under the circumstances (I subsequently discover you can buy Rey De Cabrito-branded whole dead goats, attractively packaged, at the airport). The next night my plans to go out and see a different side to the city with some actual local people I’ve been introduced to are scuppered by the fact that it is raining more than anything I have ever experienced before, with thousands of melted glaciers drowning the city, including quite a few cars and their occupants. Ultimately, if human beings used their cars less, it would rain less in some places, and more in others. In a not dissimilar way, flying around doing absurd exams while writing self-important rambly blogs criticising others for their bad habits don’t do no good neither, but qué se puede hacer?

*In Spain the word for rip-off is ‘timo’. Whether or not this has affected the fortunes of a certain major multinational mobile service provider I don’t know, but I suspect the Spanish have noticed the connection.

** I didn’t mention the issue of drugs in the introductory list because I couldn’t think of a synonym for narcotics beginning with ‘B’.

*** Subsequently the new Governor (see below)’s recently-estranged brother accused the newly-elected Governor of running a protection racket of his own, involving charging local casinos $40,000 a week to operate.

**** At the risk of being slightly controversial, I do think that it’s a shame that the new James Bond film wasn’t being filmed there at the time.