Are we ready, Chiara asks.

Of course we are, I respond. We’ve reached that state of grace all couples arrive at exactly seven weeks before the scheduled birth of their first child, when everything that can be taken care of has been and it is now time to relax. Nothing can surprise us from this point on; there is nothing we haven’t already anticipated, either before or after the birth. There are no more decisions to be made and no more tasks to be carried out. All we have to do now is wait for exactly seven weeks and then pop along to the hospital, where they will give us a bag with a baby in it. We’ll probably just have to sign a piece of paper or something; after all, this is Italy. The only other thing we have to do is to choose the pushchair.

Now among all the tricky aspects of preparing for impending parenthood, this is by far the most complex. It shouldn’t be; there are after all only three companies which manufacture passeggini: Inglesina, Chicco and another one I can’t be bothered to think of the name of right now. The problem is that between them they have over 65,000 separate but essentially identical models. It appears to be an agnotological product range, designed to spread doubt and confusion to the point where prospective mums and dads are driven so insane that they are happy, indeed grateful, to hand over the price of a roadworthy second-hand car. I’ve noticed over the last week or so that when we’ve seen a freshly-born child we are far more likely to coo over the buggy than the baby itself. It’s always tempting, after getting the how-old-is-it-does-it-make-a-lot-of-noise preliminaries out of the way, to bombard the proud parents with questions about their pram. Then there’s YouTube and its sottomondo of buggy-demonstration videos, none of which feature any actual babies. The products themselves have all been given bastard portmanteaux of words such as urban, rural, walker, stroller, runner, jogger, all-terrain, duo, doppio, duopoly, duology, trio, el tri, trilogy, threesome, quad, quinny, compact, kompakt, kompact, smart, mini, maxi, espresso, flat white hazelnut macchiato…a simpler choice would appear to be the one called Zen, but then do we go for Zen Light, Zen Life or Zen Lux, all of which happen to cost exactly €600. Personally I’d like one of the ones you can fold up and fit into a backpack, because this would suit my (ahem) ‘lifestyle’*. But then there’s my wife’s ‘lifestyle’ to consider. Plus the baby’s ‘lifestyle’, which will presumably for the time being revolve around eating, crying, soiling itself, getting cleaned up, soiling itself again, giggling and getting pushed around by its parents**. But what will we push it around in? All of the makes and models are modular (like the DELTA!), meaning you get all three out of pram, pushchair, and carseat***. Not that we have a car, and we’re not planning on getting one, because that would send completely the wrong message to the child about how to live, which means we need a special pushchair for forcing our way on and off the 170 bus when it finally deigns to show up****. I’d also like to get back to my pre-pregnancy weight, preferably from about 12 years ago when I used to go jogging all the time, which means getting one of the running options. I believe there’s even a model designed in conjunction with British Military Fitness (which is competitively priced at €600), although actually the Crossfit one also looks good, in fact it comes with six months’ free Baby Krav Maga lessons for an all-inclusive price of (you guessed it) €600. Obviously given our lifestyle needs we’re going to have to buy more than one, which means we will also need to get a bigger apartment to store them all in. I bet there are six-month-old babies who can show off entire garages full of gleaming luxury strollers and have whole teams of servants who fine-tune them and who get horse-whipped if the baby’s first word isn’t ‘lamborghini’. After all, Prenatal does have a VIP range, giving the lie to the now-laughable claim that we are all born equal; indeed a moment’s ‘research’ reveals that, yes, we could indeed pay much more than €600 if we so desired or could afford. I’m sure Godiva do their own range of strollers, and I’d be very surprised if Marlboro hadn’t got in on the act*****. However, our needs are more modest, partly because we happen to live in a small flat with a tiny lift, which means we’re looking at one of the light/lite/compact/kompakt/smart ranges with a wingspan of less than 50”, which luckily narrows the choice down to only 30,000 separate options. Or maybe we can get one that is specially designed to be used only inside the lift, but nowhere else, and then another intended for people whose lifestyle involves getting into the lift, and a third aimed at that specific market segment which prioritises departing lifts.

I suppose it’s easy to see why the all-terrain models are proving increasingly popular. The other day I saw a photo from Aleppo of a woman running, pushing her child in a pushchair, escaping the Russian bombs. It was a heartbreaking photo, and for once it didn’t occur to me to look at the make or model. I think I did, however, spend slightly longer than usual thinking about her plight and if there was anything I could do to alleviate it. We are enormously lucky to be able to spend time thinking about pram-related nonsense, and it’s even fun, if exasperating, to do so. We’re also very fortunate to be having a baby at all, as there are so many people who have to pass through the purgatory of IVF, paying a great deal more than €600 in the process. Plus there are very many wannabe parents for whom the idea of funding the upkeep of a child is about as realistic a prospect as buying a second home on the moon. So we’re privileged in number of ways, although personally I tend to think my main blessing in life is that I do not have to work in the marketing department of a pushchair company.

I was, of course, joking at the start. I know that these will be some of the busiest few weeks of our lives. For one thing, I’ve got to try and get my hands on a photo of Chiara in a carrozzina to put at the end of this article******. Then I’m planning to produce a piece based on my experience of migrating between countries centring on particular songs which have marked my trajectory. After that I want to finish a thing I’ve had in the pipeline for a while about the street where we live. It’s going to be a difficult few months but I’m sure at some point Chiara will be happy to stop moaning about her back pains for a few minutes and lend me a hand. They say that having a blog is one of the most stressful experiences you can go through in life, so it’s essential that we work together on getting through the next few months and end up with something we can both feel really, really proud of.

* This word is intended to be pronounced similarly to the way in which Natalino Balasso pronounces ‘Farmville’ in this video. Or ‘smartphone’ in this one.

** Maybe we should leave the whole passeggino-buying decision for another thirteen or fourteen years or so, just in case she decides to become a goth or something.

*** You can in theory buy all the individual components separately, except for the fact that for the carseat one you also need to buy an adaptor, but you can’t find the adaptor anywhere online, and none of the supposed stockists stock the adaptor, so you have to buy all the components together, for €600. It takes a lot of googling and a huge amount of swearing to get to the point where you find this out.

**** Mind you if we do at some point decide to give up on Rome’s ancient, crumbling and bad-tempered public transport system and buy a car on the basis that she needs one even if we don’t, at least we can put the debt to the planet on her karmic balance sheet rather than ours. We could then offset our guilt about this by refusing to buy her a smartphone until she’s at least 21 years’ old. It’s important to think about such things in advance.

***** People who read footnotes but are disinclined to google things for themselves will be astonished to learn that there 247,000 results for ‘Marlboro strollers’. 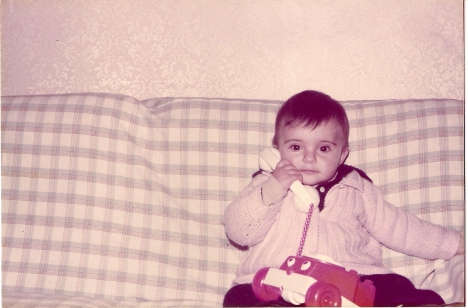