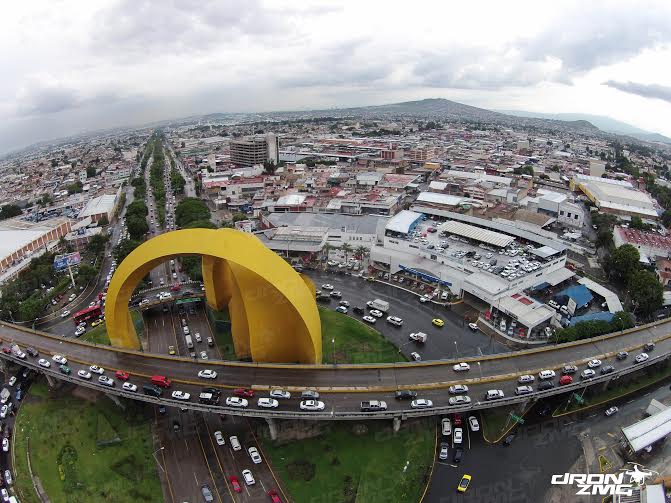 Across the doors of the lift in my hotel in Guadalajara there is a huge peel-and-stick painting of someone’s idea of a blue-sky palm-tree paradise, but where you might expect to see golden sands and sunlounges, what greets your eyes instead is a Burger King concession next to a huge line of cars. The good people of Guadalajara, it seems, enjoy their traffic jams. They are also fond of shopping centres, and of the car parks that must therefore surround and lie underneath them, which is why in search of an actual bar it takes me about half an hour of hard work to find one amidst the Walmarts and VIPs and Chili’s and VIPS and Chili’s and VIPs and drive-in Walmarts Walmarts Walmarts. The entire landscape in the area where I happen to be hotelled is composed of shopping centres, megamarts, car showrooms and names of stores in six-foot writing designed to be read by people speeding past or more realistically biding time in embotellamientos. It’s on another scale from where we live in Mexico City. The city is effectively unwalkable and the only places I can find to eat without giving up and joining the traffic are restaurants rated for their parking rather than their food. It doesn’t help that Guadalajara is immense and it takes 45 minutes to get anywhere fun even by car – it feels strangely much larger than DF. It’s the kind of hyperalienating environment which José Saramago deplores  in ‘The Cave’, a place which is, in the words of Frederick Jameson, ‘useless as a conduit of psychic energy’. It puts me in mind of Cabot Circus, that huge alien spaceship which has obliterated the centre of Bristol. There’s nothing new about such an environment and there is little to say about it that authors such as JG Ballard, William Gibson and Will Self haven’t already written. But my individual experience of it is inevitably physically and spiritually exhausting. 20th Century modernity became fixated on the private motor vehicle and the 21st Century shows no signs of moving on despite its own terminal obsession with the smartphone. Who cares about a three-hour bottleneck when you can sit in your car and text. It takes me three attempts to get to the centre using public transport and my feet; eventually I give up and take a taxi. 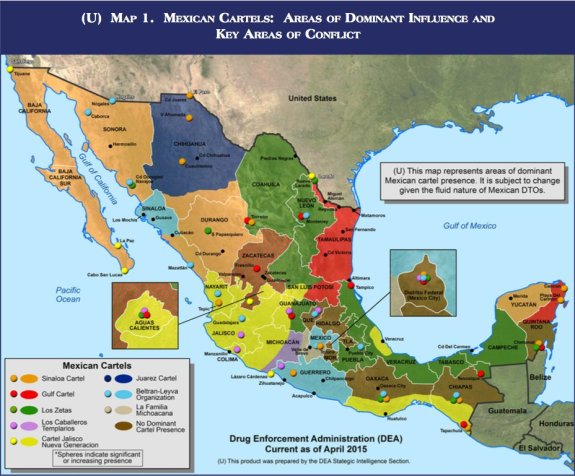 I always learn a lot from Mexican taxi-drivers, about politics and the ins-and-outs of gang wars. Asking about who controls the city (and which politicians they are in league with) starts to feel a bit like asking how the local football teams are faring. In Guadalajara there has recently been a low-level war between two mafia groups and now things are (ostensibly) relatively calm because one of the sides won. For taxi drivers in Guadalajara the theme of violence and politics is intimately connected to their jobs and to the increasing dominance of one particular cartel known as…Uber.

The transition to the post-human economic model is not proving to be smooth one anywhere you look, and in Mexico like so many social and economic changes it is mediated by violence. There have been physical attacks on and kidnappings of Uber drivers, and it is hard to tell whether this is inspired more by traditional drivers struggling to survive or by cartels not wanting to lose their share of the market. The situation is unsustainable both from the point of view of taxi drivers and from the perspective of those who drive for Uber. On the part of the normal taxi drivers there is outrage at the corruption involved. The governor of the city recently changed the terms of their licenses; he also introduced an unsustainable level of competition into the trade by buying dozens of cars and putting them to work for Uber. Hence, like in many other cities, many people working ‘for’ Uber are not the owners of the cars they drive. In any case the amount that drivers earn from Uber is not enough to maintain a car to the standard the company demands and certainly not enough to replace it after a few years. Over time, as competition intensifies, individual drivers don’t earn enough and they lose their ‘jobs’. In the meantime they have to cope with sudden increases in how much they (or their bosses) have to pay the company – in mid-2015 they were faced with an overnight 20% to 25% increase. The clients of course won’t notice when drivers drop out, because as the traditional taxi service disappears there will always be new ones, who will then in turn fade away – indeed, who will literally disappear given the amount that Uber is investing in the development of driverless cars. And although Uber is not yet profitable it has bottomless pools of capital to draw upon, given that companies such as Goldman Sachs are involved. The drivers are just place-holders, stand-ins for robots who haven’t quite made it out of the factory yet. I realise when talking to the driver on the way back to the hotel from work that this happens to resemble my own situation. I’m here to administer international English exams, speaking ones that are conducted in person and which take about 14 minutes each. The students also do written exams, which take considerably less time to grade (I currently hold the secret world record), and so are the much more lucrative part of the deal. However, it is rumoured that the written exams will soon be conducted online, and then it is safe to assume that the spoken exams will follow, as already happens with the competitor exam. 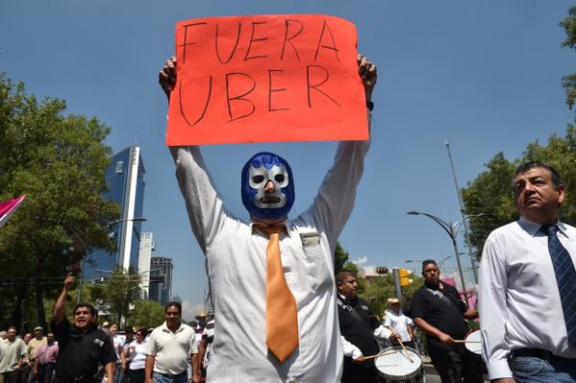 In addition to the damage it does to the livelihoods of working people, there are several reasons why using Uber makes me so uncomfortable despite its obvious advantages in terms of convenience and (ironically) comfort. It’s useful to take the name seriously. Uber provides a comforting and flattering sensation of belonging to the elite – in Pynchonian terms, to the elect rather than the preterite. In the case of any danger or discomfort we can be whisked away in and to safety. The fact that it is cash-free feeds the fantasy. The phrase “there will be a car waiting for us” is a very seductive one; silently, magically, someone turns up; there’s machinery behind the scenes taking care of our needs. The way Uber operates means that we are effectively being driven round on the internet; just like we can now choose to mentally absent ourselves from awkward social situations with less than a digital click of the fingers, Uber gives us the opportunity to slip away physically. Although Uber drivers I have encountered have been unfailingly courteous the system works to abstract relations and frees me from potentially perilous social obligations: I’m not forced to listen to obnoxious phone-ins on the radio, or (even worse) having to listen to Smooth FM; I obviously don’t have to stress about possibly not having enough cash. I also learn a lot less from drivers in Uber cars; interaction feels more stilted, more like I’m talking to a tourist guide than a taxi driver. The service serves to cushion us from daily frustrations and curtain us off from awkward personal engagement with the service provider; our relation with him or her is more remote, so he or she is interchangable. As such the whole experience puts me in mind of the scene in ‘Cloud Atlas’ which depicts a future in which only a tiny number of superconsumers have the right to shop and are served by a sub-race of interchangeable and immediately disposable replicants.

When we pay for special treatment what we are paying for is an enhanced image of ourselves. This is the ‘added value’ that companies are desperate to add to their products. This cultural tendency to fantasise ourselves as superconsumers partly explains the appeal of figures like Trump and the Kardashians. Trump in particular lives a fantasy life of a fantasy billionaire, and by taking Uber we also partake in this roleplay. This aspiration-as-pure-fantasy is what capitalism is increasingly betting on. An article in the Financial Times in 2013 urged its readers to shift their investments into luxury items, “many of which have been outperforming peddlers of more humdrum goods in recent years”.  Uber stitches privilege seamlessly into the fabric of our lives and helps us pretend that we are not paying for it. In the back of an Uber car I can stretch back and mentally flick through the latest edition of How to Spend It; I certainly find that I am much more likely to ignore the driver altogether and pretend I need to do stuff on my phone. I can be driven round like the billionaire in ‘Cosmopolis’, seemingly detached from the social and economic pressures exerted on the driver. Uber drivers rarely complain: about other customers, about their job, about the city they live in. They are after all more dependent on the person paying them, who can, if they are in any way displeased, jeopardise the driver’s future income at a safe distance with a tiny gesture of the thumb. They are our servants in a way that taxi drivers are not. Uber is all about strategy, about accomplishing total control over the field in which they operate. Normal cab drivers have tactics to evade total control and exploitation; this might consist in ripping off the customer, talking back, or taking detours. They know the cities in a way Uber drivers generally don’t, dependent as they are on GPS. Tl;dr: I think it’s wrong to use Uber. 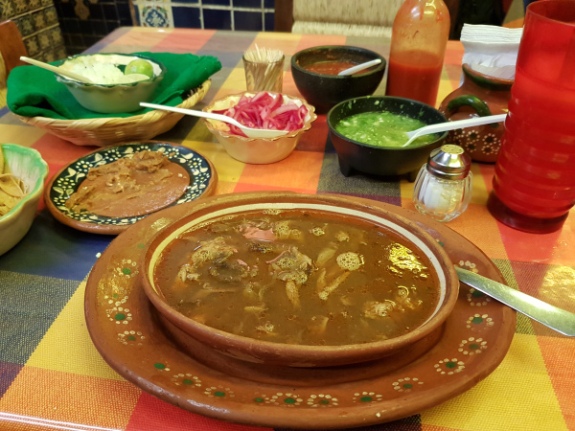 When I do at long last get to the centro histórico of Guadalajara its beauty and charm stupefy me; I’m glad that on this third and final visit I finally made the effort. The colonial heart of the city was designed, set out and built specifically in order to ridicule any humble attempts I might make at describing it. Jalisco es Mexico is the slogan used to promote the region and the symbols and bright colours you see emblazoned all around insist on this, as do the ubiquitous mariachi music and the incessant invitations to try out the local tequilas. In a tiny sundrenched plaza called Nueve Esquinas I gorge on birria, the ingredients of which are one entire dead goat boiled in its own blood, four different kinds of chilli, and about two litres of my own sweat, as the local beer and a shot of the regional moonshine sieve right through my hair back into the bowl and so I promptly grab some more tortillas, dive in and perform a perfectly executed Mexican version of La Scarpetta. Afterwards I walk around in a daze in the blistering heat and take a hypnogogic doze on a bench. It’s all too much to take in, and I don’t want to have to deal with the tedium of rush hour, so I take a taxi back to the hotel with a driver called Alberto who comes from Monterrey and whose girlfriend is scheduled to give birth to twins any day now. It’s a high-speed, bumpy but convivial experience soundtracked by norteño music a un volumen ensorcedor. Addled as I am with goodwill, goat and agave I offer to do a deal over the price so I will pay double the pittance I am charged and then claim it back from my employer. I try to explain the phrase stick it to the man, for which I’m sure Mexican Spanish must have range of equivalents, but only confusion results and I decide it’s probably about time for another siesta.

One thought on “Guadalajara: Why I stopped using Uber”