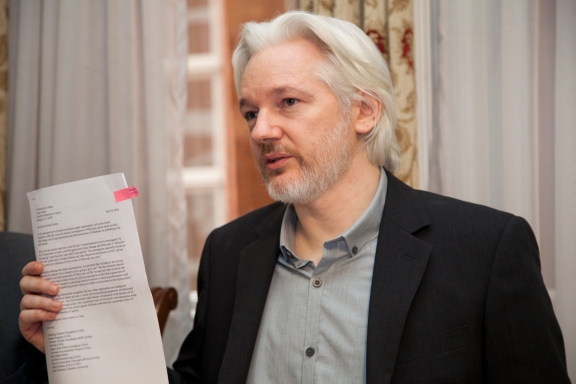 Wikileaks founder Julian Asange has revealed to Fox News that a Russian-connected source didn’t leak hacked emails from the Democratic National Committee to his organization. He also confirmed that evidence suggesting a pattern of past sexual discretion on the part of President Elect Donald Trump was false. Asange went on to assert that all and any attempts to link Donald Trump’s father Fred Trump with the Klu Klux Klan was inaccurate, and also stated that the KKK itself had been the victim of widespread misrepresentation in the past. In a separate statement given to Russia Today, Wikileaks also announced that its investigation into the recent Austrian election revealed a disturbing level of foreign intervention which may have influenced the result.  Meanwhile, a further Wikileaks press release stated that information had come into its possession which suggested that long-standing rumours of former Ukip leader Nigel Farage and his father’s involvement in the British National Front were ‘definitely unfounded’. In a separate development, a document placed on the Wikileaks website suggested that reports of mass killing of civilians as a result of Russian bombing of Aleppo had been falsified, while on Wednesday morning in a statement to the news organisation Breitbart Wikileaks said it had ‘firm evidence’ that the outgoing US administration had forged papers related to the birthplace of President Barack Obama. Asange also spoke by phone with Alex Jones of the website infowars.com and confirmed that his organisation had documents indicating that governments across the world have been manipulating weather patterns and that the chemical trails from airplanes suggest that this information is well-founded. Asange also gave a press conference Thursday from his cupboard in the Ecuadorian Embassy in London during which said he now had ‘proof’ that he was innocent of the rape charges leveled against him, promising to provide the ‘conclusive’ evidence to the international media as soon as his fax machine was up and running again. He also announced plans to merge the Wikileaks website with that of Breitbart, Infowars and davidicke.com in order to combat the rising influence of ‘fake news’ from websites such as the Guardian, the BBC and the New York Times and promised to release a ‘devastating’ report handed to Wikileaks by an anonymous source which he said would ‘seriously challenge’ our understanding of both what he called the ‘hoaxacaust’ and the 1969 Moon Landings. In response to a question about the allegations from some quarters that his organization is now little more than a puppet of the Trump Government, Asange waved his arms in a wooden fashion, fell to the floor with a clattering sound and made no further comment.

UPDATE: I posted this on the Wikileaks Facebook page, and within a few hours this actually happened:

…it then disappeared from their page like a flash. If they’d checked the tags on the original post they would have seen it was flagged as #fakenews and #trolling. But they didn’t -they didn’t even click on the link before liking and sharing it. That’s what Wikileaks is like these days. So Assange’s claim that the emails didn’t come from Russia is almost certainly not true either. They simply don’t check their sources.