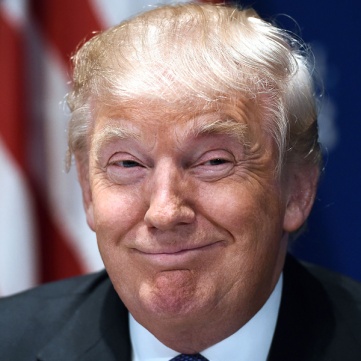 The renowned pediatrician and psychoanalyst Donald Winnicott died in 1971, when Donald Trump was 24 years old. This article is an excellent short assessment of his life and achievements. A central element of his thinking is that the analyst should take on the role of the mother and repair parts of the psyche that were damaged in early childhood. He wrote of his own work:

I find it useful to divide the world of people into two classes. There are those who were never ‘let down’ as babies and who are to that extent candidates for the enjoyment of life and of living. There are also those who did suffer traumatic experiences of the kind that result from environmental letdown, and who must carry with them all their lives the memories of the state they were in at moments of disaster. These are candidates for lives of storm and stress and perhaps illness.

In preparation for the birth of our first child I’m currently reading Adam Phillips’ biography of Winnicott. On doing so, several passages struck me as relevant to understanding the other Donald, the one who is now (nominally at last) one of the most powerful people in the world.

While Winnicott is admired for his gentleness and intelligence, Donald Trump is not. It is certain that the latter has never heard of the former, as he doesn’t read books. It’s possible that he has never read a single one. Neither has he read the Constitution of the country he now (on paper) governs. He “doesn’t have the time”. He may have never even sat through an entire film: in Mark Singer’s then-funny now-not 1997 New Yorker profile of Trump he writes:

We hadn’t been airborne long when Trump decided to watch a movie. He’d brought along “Michael”, a recent release, but twenty minutes after popping it into the VCR he got bored and switched to an old favorite, a Jean Claude Van Damme slugfest called “Bloodsport,” which he pronounced “an incredible, fantastic movie.” By assigning to his son the task of fast-forwarding through all the plot exposition—Drumpf’s goal being “to get this two-hour movie down to forty-five minutes”—he eliminated any lulls between the nose hammering, kidney tenderizing, and shin whacking.

According to Russell Brand (who has met Trump), the new “President” is “a wanton baby”. Reading about Winnicott makes me think we should take this seemingly glib assessment seriously. There’s been a lot of speculation as to his precise mental condition. His cognitive faculties and emotional temperament appear to be only slightly more sophisticated than those of an adult pig, although there is evidence that pigs do experience some measure of empathy for the suffering of others of their species. I know that when Jon Ronson wrote The Psychopath Test his express intention was to ensure that people should not go throwing the term around with wild abandon, but his book is a very useful primer on the subject, and although some have claimed that Drumpf is nothing more than an absolutely appalling human being, the fact that he was the hero of Patrick Bateman in ‘American Psycho’ tells us a great deal*.

I’m not a psychologist, and obviously have never spent time with Trump. I hope I never will, and I pray that my daughter will never meet him or anyone remotely like him. It’s possible that he should be in a controlled environment where his access to other people is strictly limited. Instead, thanks to the bitterness and puerility of those who voted for him and the cynicism and apathy of those who refused to oppose him**, he will be dealing directly with people who have the authority and means to destroy humanity. His delusions will not be contained but given full expression: after all, as Jacques Lacan said, the madman is not only the beggar who thinks he is King, but also the King who thinks he is King.

His supporters, if there are any that are capable and honest enough to read through an entire 1,000-word article, may feel that a man who punches his own sons in the face and openly talks about being sexually attracted to his own daughter is not a priority for clinical attention. Anyone who has such an attitude clearly has their own issues they need to address. For those who are not yet so immersed in the Trump cult mentality, the following quotes from and about the work of Winnicott with regard to early infant development may give such people a further opportunity for reflection on just what kind of fucked-up creature is now in charge of the most powerful nation on earth.

Trump’s tweets: In a baby’s life there are long periods when he is just a bundle of disparate feelings and impressions and he doesn’t, as an adult would say, mind that this is the case as long as from time to time he comes together and feels something.

Real development can only come out of, and is the process of finding, belief in the environment.

Psychotic patients are notoriously and maddeningly oblivious of bombs, earthquakes and floods.

Trump the sociopath: He wants to know how much damage he can do, and how much he can do with impunity. Then if he finds that he can be physically managed, he starts to test by subtlety, putting one person against another, trying to make people give each other away, and doing all he can to get favoured himself.

And my personal favourite: Fascism, delinquency, rage, misogyny, alcoholism are only the symptoms of poor childhoods that the collective will have to pay for. The road to a better society begins in the nursery.

There you have it: Trump is stuck at some point in his infant development. He is by no means a mature adult, and he certainly should not be anywhere near political power. And if you’re still unconvinced by what I and Donald Winnicott have to say on the matter, don’t take our word for it: have a listen to Trevor Noah.

* – in the words of the New Yorker, Drumpf “exhibits levels of egotism rarely witnessed out of a clinical environment”; meanwhile the ghost-writer of one of “his” “books”(‘The Art of the Deal’) says openly that if he were to write it now he would simply call it ‘The Psychopath’.

** I really hope that the sorrow that such people feel today is commensurate with the extent of their betrayal.

UPDATE: It’s not only Trump that doesn’t know how to read, his supporters don’t either. I posted this article in a pro-Trump Facebook group and within ten minutes it looked like this:

One thought on “Tale of Two Donalds: Winnicott on the infant Trump”