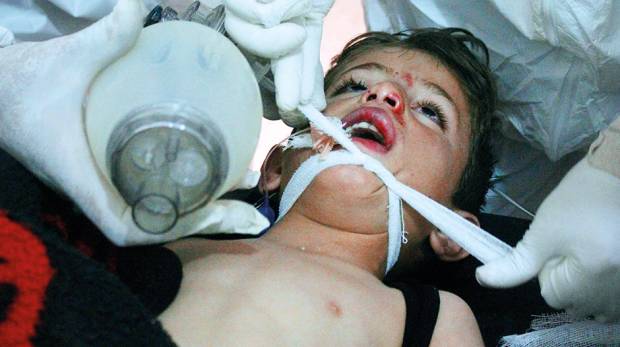 It’s a relief to see that the world as a whole can still respond with horror and revulsion at the sight of something as unambiguously horrifying and revolting as the chemical attack on civilians in Syria. A Kremlin spokesperson nonetheless dismissed it as “fake news”, implying it had been staged to discredit the regime. Pro-Putin propaganda outlet Infowars blamed the supposed attack on George Soros and other Jews.

According to University of Kent psychologists Karen Douglas and Robbie Sutton in the British Journal of Social Psychology, “At least among some samples and for some conspiracy theories, the perception that ‘they did it’ is fueled by the perception that ‘I would do it,’”. In the case of Vladmir Putin, he already has done something similar.

Here are some facts about what Putin was responsible for in 1999. They are facts because they cannot be disputed by any reasonable means. The Russian Government has failed to put together any other plausible explanation.

(If you are among that growing number of people who are inclined to automatically dismiss such features of reality as the violence and corruption of the powerful or the findings of science with regard to the climate, you are probably in need of some form of therapy. Luckily it’s never been easier to seek out such help. Google ‘mental health services’ in your area. You may be directed to a practitioner who is willing to negotiate a lower rate. Tell him or her that your short-term objective is to read some facts about Vladimir Putin without allowing your judgement to be clouded by denial. That will give you a reasonable and not too ambitious goal to work towards.)

In September 1999, on the eve if elections to choose Boris Yeltsin’s successor, a series of explosions took place in four apartment buildings in Russia. They killed hundreds of civilians and were swiftly attributed to Chechen terrorists. However, local police in a town called Ryazan arrested secret service (FSB) agents planting a bomb in a fifth building. The head of the FSB claimed it was a ‘training exercise’, but was unable to explain why the explosives being used were real. There was a quick cover-up, and amidst a febrile atmosphere Putin was elected three days later and soon started a new war in Chechnya. A number of those who continued to investigate the bombings (including Anna Politkovskaya and Alexander Litvinenko) were subsequently murdered. Putin’s Government has gone on to assasinate dissidents at home and abroad and to murder journalists and anyone else who tries to share information about real events.

He would meet once a week with the heads of the television channels in his Kremlin office, instructing them on whom to attack and whom to defend, who is allowed on TV and who is banned, how the president is to be presented, and the very language and categories the country thinks and feels in. (from The Atlantic.)

Such insidious propaganda is not just for a domestic audience. During the US elections targetted individuals with false news stories via Facebook, as The Washington Post documented.

Again, these are facts. If you’re interested in this area then you need to take them on board. Otherwise they will sink your case.

One tool apparently used to spread disinformation is Facebook groups. Rachel Maddow reported on one ‘pro-Bernie Sanders’ group that is based in Albania, while the Daily Beast details how Putin’s operations targetted those who think of themselves as ‘progressive’. This may explain why so many posts in such (ostensibly anti-Trump) groups dismiss out of hand any suggestion of Russian involvement in the US elections.

The bombings in Saint Petersburg followed two major anti-government protests. The images of death and destruction will have the effect of allowing the Government to clamp down on such dissent. Two days later came the chemical attack in Syria. Even such a malignant, deluded narcissist as Trump felt compelled to condemn it. His way of doing so (implying immediate military action in order to satisfy his insecurity complex wrt his predecessor) is incredibly dangerous. I’ve argued here several times that Trump’s Presidency is and remains an impossibility. In such a prominent role, consistently disrespecting the truth gets you into trouble. Up until he became President, Trump led a mostly consequence-free existence, and it seems he has only got this far by following the dictats of Steve Bannon, an actual psychopath whose explicit short-term goal is to provoke a world war. The fact that in response to this sudden geopolitical crisis they have sidelined Bannon suggests that know they will also have to get rid of Trump. Somehow.

As for Putin, he’s a monumental liar. Does saying that somehow mean that I think that Hillary Clinton is morally impeccable or that I believe the recent history of the US with regard to foreign interventions to be free of reproach? No, it doesn’t mean any of that. Bizarre as it may seem to some who think of themselves as ‘progressive’, opposing Putin and opposing Trump are highly compatible. Putin, like Assad, is a brutal tyrant who murders ordinary people to achieve his political objectives. He’s no friend of anyone who regards themselves as even remotely progressive. And anyone who professes to ‘believe’ the Kremlin’s claim that the chemical attack is ‘fake news’ is probably either in the pay of the Russian Government or in dire need of psychiatric treatment, or both.