Football has been all over the front pages this week, and although I’m neither a huge fan nor a massive expert on the sport I do sort-of follow it and have some possibly useful/unpopular feelings on the subject which, partly in the spirit of Louis CK’s classic ‘of course…but maybe…‘ routine and also in my own tradition of writing provocative screeds about what the Guardian has taken to calling ‘soccer’, think worth airing. 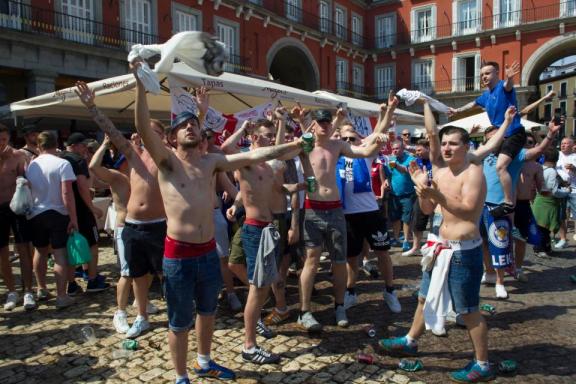 1. Madrid. The sight and sound of Leicester fans rioting in the Plaza Mayor while shouting drunken nonsense about Gibraltar is to be roundly, squarely and triangually condemned. Of course. But maybe…a lot of the tabloids doing the condemning are the very sources of both the misinformation being yelled and the (sorry, Jeremy) momentum for such displays. In any case, given football’s relationship to territory, maleness and alcohol, a certain amount of violence is absolutely inevitable. When a few years ago in London the Evening Standard cleared its front page of foreigner hatred and upper class triumphalism to make way for a diatribe at how appalling was a bit of minor rioting by Millwall fans, I was left feeling a bit nonplussed. There seems to be a major and wilfull misunderstanding in some quarters of the media about the role that football plays in British life. For centuries the country sent generations of working class lads overseas in order to keep Johnny Foreigner in check, no questions asked. For the last few decades they’ve been tearing into each other at home and away instead. I don’t want to come across as all class tourist/reverse snob and I do hope that my feelings on this are not provoked by buried ancestral loyalty to our lads – personally I think it may not be a bad idea to put the whole of the UK mainland under the control of the Spanish in order to avoid any more Tory-inspired catastrophes – but I do think that it’s better that football fans beat each other up than have a go at people who happen to have been born elsewhere.

I say all this as someone who is, partly thanks to an accident of birth and barring possibly my mum, Sheffield’s least likely hooligan, and also a fan who, when I visit Bramall Lane (UTB), is no more likely to be welcomed as a member of the same species than a particularly bookish-looking antelope at a watering hole generally reserved for wildebeest. I don’t have the hair (or lack thereof), the accent and a brief conversation generally confirms that I don’t follow the team closely enough to qualify as a proper Blades supporter. 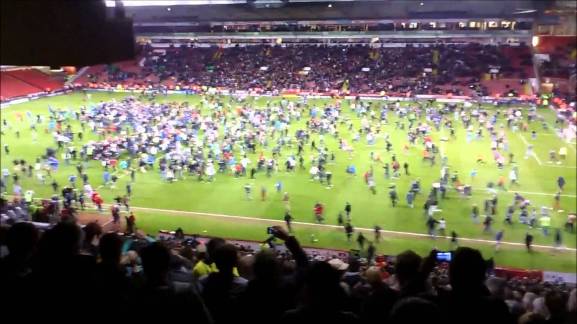 2. Sheffield United’s pitch invasion. Nevertheless, sometime in April or May 1982 I stood in the Junior Blades section and watched fans pour onto the pitch to celebrate winning the 4th Division championship, and I was pleased to see such scenes repeated last week as we (UTB) clinched promotion from League 1.  The football authorities hate pitch invasions and go to (sometimes murderous) lengths to prevent them, partly because they damage the grass but mainly because they (stern voice) ‘Bring The Game Into Disrepute’. The same is said of ‘excessive celebrations’, e.g. the moral stain left on the universe by a player doing a happy little I-scored-a-goal dance or lifting up his shirt to reveal a birthday message to his baby daughter. This in a game marked by genuinely shocking and blatant corruption, money- and reputation-laundering, tornaments held in slave states, the open feting of racists and rapists, club sponsorship of everything down to the official player’s undergarments, the official water everyone officially associated with the club officially drinks and the official brand of condoms that are optimistically distributed on the official team bus. Of course there are tasteless and impetuous things that individual players and fans do that serve as a distraction, but maybe it would be easier to identify things that bring the game out of disrepute. Football’s high horse is a pantomime one which goes clippety clop clippety clop across the stage and then gets sexually assaulted by a 22-year-old with a £125,000-a-week salary, a regulation hipster/Isis beard and a Hindi tattoo that (unbeknownst to him) means ‘twat’. 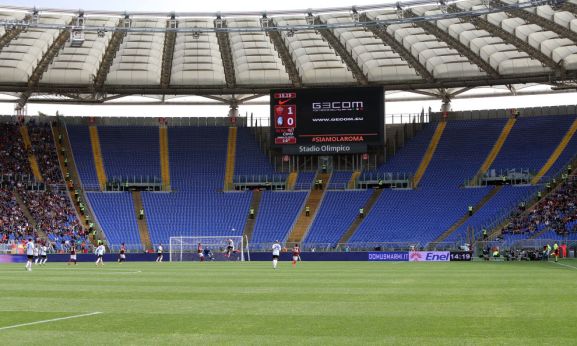 3. On the white stone of the beautiful bridge crossing the Tiber* round the corner from our house, some stronzetto has left prominent graffiti protesting against the reorganisation of territorial subdivisions in a football stadium**. This is not as arcane as it sounds. Over the last couple of years a large proportion of Roma fans have been on strike because the stand where they, er, stand has had some new barriers installed, separating them from each other. As a result they refuse to go and cheer on their team (they still ‘support’ it, but that’s a difficult concept to make sense of, even when the fans in question aren’t petulant arseholes). As a result, there’s no atmosphere at the matches and therefore no point going to see Roma. The couple of games I’ve witnessed have been desultory affairs, and given that the club with whom Roma share their Mussolini-obelisk-surrounded stadium (Lazio) are the chosen team of local fascists I’m very disinclined to lend them my support in any form. Of course not all changes that clubs make to their stadiums are to the liking of fans, but maybe if you refuse to go to the stadium as a result you weren’t really that much of a supporter in the first place. 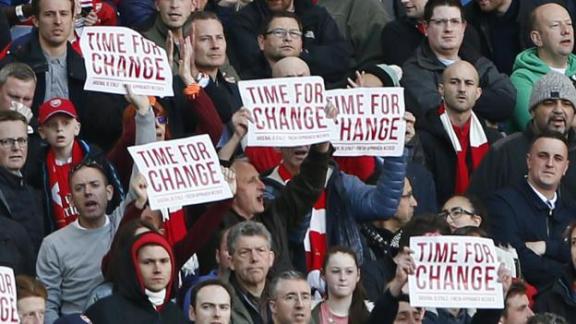 4. Arsenal. Now, football deserves to be taken seriously. Supporting a team involves (and for some resolves) issues like identity, belonging and purpose, rather like a religious faith. Arsenal fans are angry because they haven’t won anything for years (except for the FA Cup, twice, which for the gooners means about as much as a fifth-round EFL Cup victory against QPR would to the Blades). Of course it’s fun to win things and get promoted (UTB), but maybe football has always been less about winning and more about the camaraderie that comes from not having lost. Really, there’s not that much to do when your team wins something big except drink, cuddle your fellow supporters, eat a massive burger and then go home and watch the highlights til you conk out. I can nevertheless understand the frustration with Wenger, as when asked why they haven’t won anything important for so long he tends to talks about how much money the stadium is worth nowadays, how many people work there compared to when he started and how pretty the grass looked before the football match, the one in which they were beaten 3-1 at home by Stoke, kicked off. Maybe they should just make him janitor and get someone else in. 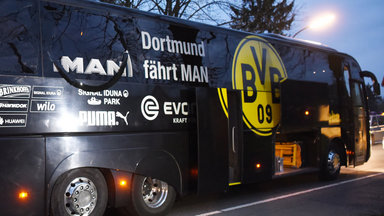 5. Dortmund. I’ve been to Dortmund and it felt like Leeds: northern, working class, post-industrial. I can see how football is very important in such a place***. Of course the terrorist attack on the team is abhorrent. But maybe…In relation to the reporting of suicides there are certain conventions that newspapers adhere to in order to avoid contributing to copycat cases. It seems to me that in the salacious publicity that’s been given to the writer of the letter (presumably also the author of the crime) there’s an excitability which may encourage others to see football as a useful target. What responsibility does football have for this? As with so much else about the game, the way the media overhypes football involves an abdication of basic journalistic responsibility. Of course it’s a good thing (and a cheering story) that fans in France and Germany united in response to the attack. But maybe…there’s a distinct possibility that such reports play into the hands of the far-right, who are never far away from the sport and always keen to bring fans under their sway. The fact that the UK’s fascist movement takes so much of its form and focus from football is a cause for concern (fuck the EDL) and in a European context the media’s coverage of fans uniting against ‘Islamic’ terrorism rather than (for example) drawing attention to the many gestures of solidarity with fellow fans and players fleeing entire societies terrorised and brutalised by Isis doesn’t necessarily bode well. To return to those Leicester fans in Madrid, misinformed and motivated by Murdoch’s increasingly openly racist Sun**** into making absolute pricks out of themselves, there are malignant elements closer and closer to political power who will make the most of sporting loyalties and emotions as an organising tool for prejudice and violence. Of course football is a beautiful game, but maybe media coverage should be careful about encouraging young men to place territorial loyalties closely linked to violence at the heart of their identities at this particular point in history. UTB. 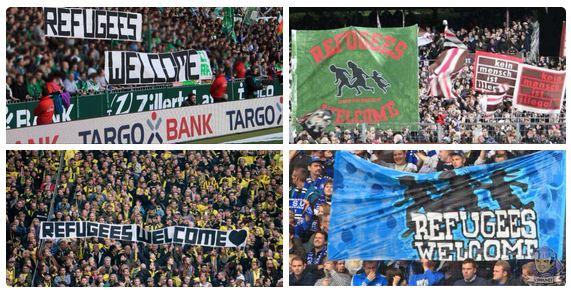 *Which, contrary to what you might hear, is not flowing with blood.

**Italians are great at frescoes but shit at graffiti.

***Obviously much more important than it is in Leeds these days (UTB).

****Why is Kelvin Mackenzie still alive?