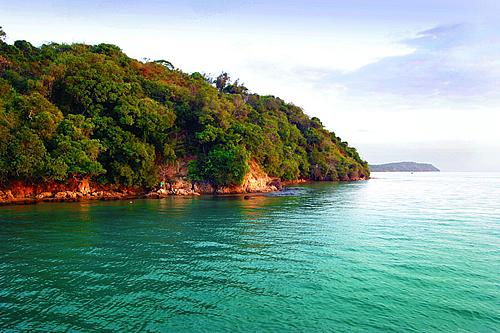 If you should ever visit the island of Inhaca in the Bay of Mozambique and make your way on foot in the 35° heat along the mangrove-lined coast to the south of the island to visit an abandoned lighthouse, and should you along the way get talking to a charming young local kid called César who appoints himself as your guide for the rest of the trek and tells you among other things about his life that he’s a particularly big admirer of the Canadian rock singer Bryan Adams, don’t tell him this story:

In the mid-1990s (a newspaper once reported) Bryan Adams was living in London. Next to his (obviously very expensive) house or apartment there was a pub which played loud music late into the night. Bryan Adams was annoyed by the noise so he bought the pub and closed it down.

If you make the mistake of telling César that story, something very like this will happen:

Ele… (He…) (laughs for another ten minutes)

César: …e não gostou…da música….(and he didn’t like the music)

César: (Laughs for another four minutes)

Richard: Este farol, está perto? (Are we getting close to the lighthouse yet?)

César (still laughing): Foi em Londres? (Was this in London?)

Richard: Acho que foi em Chelsea. (I think it was in Chelsea)

Richard’s wife: Temos água? (Did we bring any water?)

César: (still laughing) Mas quando foi? (When was this)

Richard’s wife: Este farol, está perto? (Are we getting close to the lighthouse yet?)

César: Podes contar a historia de novo? (Can you tell me the story again?)

I once (in about 1995) heard an interview on Irish radio in which Bryan Adams explained the genesis of his most recent hit song (see below). He recounted that he had been messing around in his home studio (possibly in London, I don’t know). He had a tune in his head but was feeling short of lyrical inspiration. Then his pet dog walked in, and he ended up writing a song about his dog.

Yesterday I was in Birrificio Marconi, a pleasant bar round the corner from our apartment. The TV screens were showing motor-racing (declaration: I fucking hate motor-racing) but thankfully the sound was turned off and the stereo was playing a not-unpleasant selection of Classic Rock. The song ‘Summer of ’69’ by Bryan Adams came on. Here are some thoughts inspired by the experience:

1. The intro sounds exactly like a number of songs on one of Billy Bragg’s first two albums. (I’ve thought this for over 30 years but never got round to mentioning it to anyone.)

2. It’s also a Bruce Springsteen pastiche, just like many of Bon Jovi’s early hits. In the memo on my phone it says ‘teenage working class nostalgia’, which is a bit of a weak insight, I mean it’s obvious that’s what it is. I might be able to redeem this point by telling you that Adams’s dad went to the horrendously posh English military college Sandhurst, which happens to be true and does suggest that the image on the front of the single (see above) was playing on Brucie’s success and was a bit fake.

3. I think the choice of ’69’ as the setting for the song was to some extent laviscious and contributed to the song’s success as with its lyrics about ‘playing til my fingers bled’ etc etc it’s partly about discovering sex. (NB I’ve just read the Wikipedia page about the song and my interpretation is 100% spot on.) (I didn’t edit it myself.)

4. It’s entirely up to you whether you wish to relate point 3. above to the preceding anecdote (part 2).

5. Although it appears to be a simple let’s-do-the-gig-right-here bash-it-out rock song the very impressive surround speaker system of the Birrificio Marconi drew my attention to its emblematically mid-80s production: it has a lush, inflated sound which I believe started in the late 70s with Fleetwood Mac, particularly their hugely expensive album ‘Tusk’, which features one of my favourite songs (‘Sara’). That particular production style puts me in mind of the later stages of the films ‘Boogie Nights’ and ‘Goodfellas’. As the action moves into the cocaine bloat of the early 80s it’s soundtracked by the empty and gargantuan (but at those specific moments on those specific films actually quite moving) sound of stadium rock (Journey and the like), which speaks to me of cushioned studio walls and million-dollar recording budgets. You can hear this in the Bryan Adams song, as on a decent surround sound set of speakers it has a multidimensional sound, like you’re inhabiting the music. Those studio effects quickly became ubiquitous (think of the vacuous horrors of Heart and Starship and also Dylan’s almost unlistenable 1985 album ‘Empire Burlesque’, with its empty, echoey, overproduction values), and it’s no accident that the antihero of ‘American Psycho’, Patrick Bateman, rhapsodised about the sound of Whitney Houston’s debut album and the ‘consumate professionalism’ of Phil Collins and Huey Lewis and the News; the curious thing about hearing the Bryan Adams song yesterday was that it actually sounded really, really great.

I would like to apologise to anyone disappointed to find that parts 2 and 3 of this whatever-it-is have nothing whatsover to do with Mozambique. If there’s any demand for parts 4, 5 and 6 I’ll see what I can do but I’d imagine it’s quite unlikely to emerge anytime in the near future.

One thought on “Bryan Adams in Mozambique: Parts 1, 2 and 3”