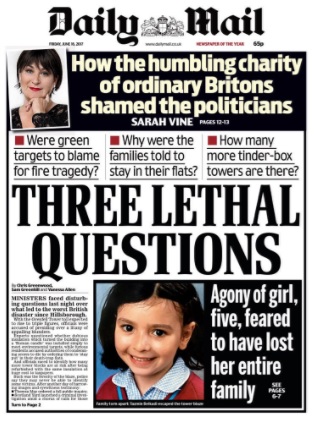 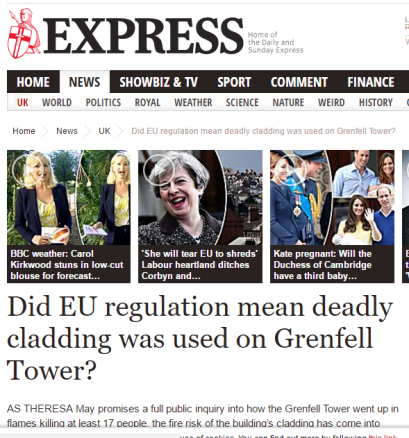 Sawsan Choucair doesn’t know if her family are alive or dead. The Guardian reports:

She stood at the tribute wall at Latymer community church, talking to as many reporters as she can. Choucair said she is “devastated” and is desperate for information from the authorities, which she said has been lacking to non-existent.

You might think that in a free and democratic society she could turn to the press to help her find out the truth. There are, of course, reporters of integrity trying to do exactly that. However, the editors and so-called journalists at two leading British newspapers (The Daily Mail and The Daily Express) don’t care about whether her family are alive or dead. If they died in the fire then so be it. The role of those newspapers is not to investigate and publicise facts in the public interest. It is to promote a political agenda based on self-interest by scapegoating the victims of political corruption.

The owners and editors of the Express and the Mail have an intimate relationship with the Conservative Party. They (to use the phrase of the day) ‘rub shoulders’ with those same ministers who refused to countenance the notion that people in the UK should live in houses fit for human habitation. The Prime Minister even met with Paul Dacre, the spectacularly vituperative and staggeringly snobbish editor of the Daily Mail, during the election campaign to receive her instructions directly. His newspaper is a mouthpiece and an attack dog for Conservative Party interests.

The facts as they stand suggest that the fire happened because of cost-cutting in a variety of areas, some of which was not just encouraged but actually mandated by government policy decided by ministers and voted for by MPs who themselves profit directly (as landlords and shareholders) from the atrocious lack of regulation in private and public housing. But as I say, the newspapers, both of which employ hundreds of people who tell themselves and their friends and families that their profession is ‘journalist’, are not remotely interested in facts. What they produce instead is pure propaganda.

The political agenda of this Conservative Party is anti-‘red tape’, pro-Climate Change (as in, against anything that might mitigate it) and anti-EU. If they are given half a chance they will walk away from the Brexit negotiations, plunging not just the country but the entire continent into absolute chaos. They will then use their newspapers to point a burning finger at whoever the most convenient scapegoat may happen to be. Both newspapers also habitually lie to their readers about the most basic facts regarding the climate, repeating verbatim absolute lies and smearing anyone who professes to care about such matters which whatever shit they can muster.

They’ve used today’s front pages to ‘speculate‘ that EU environmental regulations were responsible for the fire. The editors who commissioned the stories and the journalists who wrote it know that it’s not true. They know that it’s an absolute lie told to deflect the huge and absolutely legitimate anger at the causes of the disaster, which (taking as true what has been published and broadcast by serious news outlets) can almost certainly be traced to British Government policy.

I’ve met a few people who worked for the Daily Mail. They were generally genial people who (understandably) enjoyed a drink and felt that what they did for a living didn’t define them as individuals. Like most people in their profession, their personal opinions were to the left of the stance of their employers (how could they not be?). They saw their job as an unfortunate compromise on the path to doing something more worthy (some of them had got stuck along the path. Maybe they had a blister or something). To compare them to concentration camp guards might be a tad unfair. But given the suffering occasioned by their highly-paid work, and the fact that they are not driven by fear for their own lives but by professional ambition, if there is any sort of divine justice at the end of the rainbow, they full deserve to suffer all of its wrath. In the meantime, the frankly satanic political organisation on whose behalf they practise their trade but be kicked as far away from power as soon and as firmly as possible.

2 thoughts on “If you work for the Daily Mail or the Daily Express, you are going straight to hell”