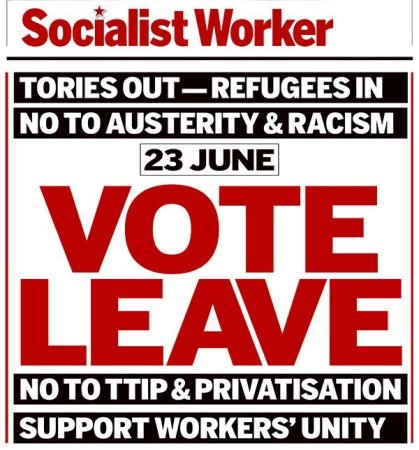 Jesus, did you actually think this was serious? I mean ‘Lexit’ was a huge pile of horseshit in the first place, but you’d need all the assembled cavalries from all the wars throughout human history, plus all the individual steeds and ponies and mares and mules and asses and palominos and thoroughbreds and foles, throw in a pantomime donkey while you’re at it, to begin to produce enough equine manure to make a case for there being anything remotely progressive about the prospect of a new war in Northern Ireland, martial law throughout the UK, some 1930s Etonian fascist in number 10, empty supermarket shelves and huge angry crowds outside everyone trampling on each other to get their hands on the last potato this side of Calais, everywhere you look gatherings of angry-looking men with nothing to do all day but share their dreams of Tommy, enough racist scapegoating to satisfy even Nigel “I was in the National Front, no one ever mentions it but I used to be in the National fucking Front” Farage, schoolchildren forced to pledge allegiance to Brexit and to promise to expose any disloyal talk around the kitchen table, talk on the news and in the press and the radio and online of the need for war and conscription and hanging and more war, every single symptom of social malaise or economic collapse attributed to traitors at home and mortal enemies abroad, and on every street corner someone calling out ‘Socialist Worker! Socialist Worker!’, the headline never seems to change, this week it’s THE PEOPLE’S BREXIT, ALL HAIL COMMISSAR REES-MOGG, DOWN WITH THE HATED NEOLIBERAL EU, THREE CHEERS FOE WHATEVER HATEFUL SHIT THE WORKING CLASS SEEMS TO BE CONCERNED ABOUT THIS WEEK, IT’S TIME TO PANDER TO WIDELY-HELD MISCONCEPTIONS, RIVERS OF BLOOD, SEND EM ALL BACK it’s admittedly a lot of words to fit on a single page and kind of painful to read but where else do you have to be? The Left case for Brexit, a basic misreading of stage directions which actually read (exit stage right, pursued by a Facebook meme of a polar bear), but do tell me all about Greece again, do the one about no one else knowing or caring about austerity and homelessness in Tory Britain, repeat word-for-word that lie on your website about ‘its neoliberal policies restrict left wing measures such as nationalisation’, repeat the word ‘bosses’ way beyond the point where semantic saturation sets in, enthrall me with some spiel about the ‘Establishment’, as if the middle name of the defacto leader of your party isn’t Theodore “and whose mother, the Honorable Ædgyth Lyon-Dalberg-Acton, was the daughter of the 2nd Lord Acton, descended from the 19th century English historian Lord Acton”, yeah tell me the one about fighting the establishment again, and then by all means go on about what Tony Benn would have wanted, I could do with a fucking laugh.