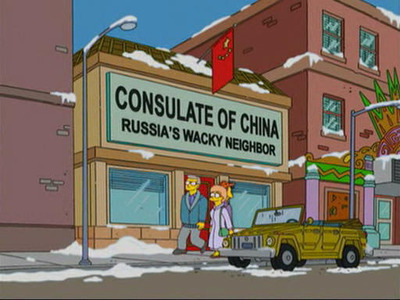 At the moment in my school we have a group of students from China and one from Taiwan, and it’s pretty interesting to witness the dynamics between the two. I’ve learnt pretty quickly that the best way to distinguish between them is to ask if they’re from Taipei or Shenzhen, because the Chinese students, who are absolutely charming in every other way, really do feel obliged to forcefully respond with the point that They Are From The Mainland, And Taiwan Is Part Of China. I have to confess that now I’m not in China anymore my response has been to start whistling and look extremely bored – not that they seem able to take the hint though.

From what I’ve seen they completely ignore the Taiwanese kids; maybe it’s the fear of lack of face that makes them do so, because it’s pretty obvious to me that even the shortest conversation would lead to arguments which they might well lose. As a consequence most Taiwanese kids seem to think that the Shenzhen kids just don’t like them, which is a real shame. Last week at the disco the Shenzhen kids just sat in a big group near the door looking utterly uncomfortable, while the students from ‘Taipei’ and, er, other parts of Taiwan pranced around having a great time, dancing and making friends with people from other, erm, countries. So I suggested that next week the (hem hem) mainlanders bring some of their own cds to play – maybe the fact that the Taiwaners know all the same songs will force them to get to know each other a bit. I’m trying in my own small way to break down the barriers a bit – after all, they all like the same music and share a lot of cultural references, so there’s no real reason they shouldn’t be singing together at Karaoke.

It’s difficult marshalling them as a group when we’re out on excursions together – obviously the Taiwanese kids don’t want to be referred to as Chinese (yesterday I amused them by repeatedly insisting that Taiyuan is a part of China. I don’t think I was saying it right though), so I’ve just taken to shouting ‘Can we get all the ethnically Chinese people together please?!’ I know it’s uncomfortable for the Chinese students, but I just want to subtly suggest to them that their attitude makes them suddenly seem to be completely indoctrinated and more than just a little bit mad.