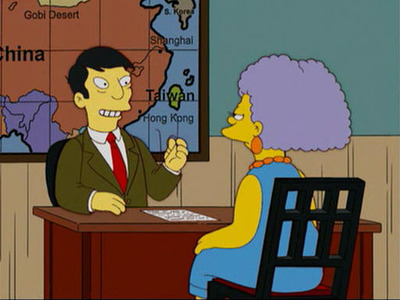 There’s nothing funny or insightful contained in these few lines, just to say that I’ve been far too busy to write anything recently but it’s still my intention to add to this site regularly.

I’ve been alternately chuffed and appalled to read all the many comments that I’ve been getting of late. If you have left comments or just enjoyed the site many thanks, I can only say that I feel very encouraged that people read and are so often inspired to respond to what I’ve left here. As for the negative comments, I have always been an extremely contrary bastard and given to acts and statements of outright provocation. Hence the picture.

Unfortunately my only bit of original thinking recently has been the invention of the word ‘Chaiwanese’ to refer to about 70% of the students I have here, who I must say have been getting along swimmingly in most of the classes. I have actually been shocked and not a little disappointed to find quite a few pro-Chinese students among those from the country that dare not speak its name – in fact most of the few classroom conflicts that have taken place have been provoked by this rogue element, rather than by the Chinese themselves.

I will find time sometime in the next few weeks to do some writing again. In the meantime, I would suggest that anyone thinking of starting their own blog but hampered by time constraints seriously consider moving to China to teach English. If I hadn’t been so fucking bored I would never had got around to starting this in the first place.

Just for the record, though, I’d stay well clear of Dalian in general, and Dalian Maritime University in particular. Now how do I get that sentence to show up in Google?!?