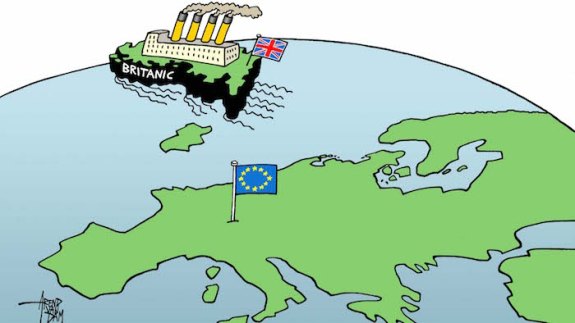 What, the fuck, is ‘Brexit’? I’m as confused and scared as everyone else about what is about to befall us, so I’ve decided to use the analytical tools of Philosophy to try to find out. This will also help me to revise some stuff I supposedly learnt 25 years ago, back when the notion of Britian choosing to leave the European Union was about as likely as a white supremacist being elected US President or someone who’s completely shit simultaneously having 15 songs in the Top 20. Ho hum.

First of all, existential. This is the easy one. If you google ‘Brexit existential’ you get 346,000 results, mostly casting doubt on the ongoing existence of both the EU and the UK. Just today Guy Verhofstadt was talking about an ‘existential crisis’ in the EU. After ‘Brexit’ has gone through, Britain won’t exist in its current form. You write some total lies on a big red bus, drive it round the country for a couple of days, and before you can say ‘we won without a single bullet being fired‘ you’ve destroyed your supposedly beloved United Kingdom for good. Simple as.

Now, ontological. ‘Ontological’ relates to the entire field or category of Being. It predetermines the existence of all else. The word ‘fulcrum’ springs to mind for some reason. Thus Mark Fisher wrote of neoliberalism imposing a ‘business ontology’, in which the only things recognised as possessing existence (political ideas, cultural phenomena, institutions, people) are those considered to have exchange value. Its ubiquity makes it difficult to perceive, as in that joke about one fish asking another ‘what’s water?’. This may explain why, in his brand-new list of ten pledges, Jeremy Corbyn makes no mention of ‘Brexit’. He’s already taken its existence for granted. Britain’s EU departure will dominate all that now takes place in British life, to the point where it will very soon be impossible to tell which problems are the fault of ‘Brexit’, which are due to permanent austerity and which can be attributed to immigration. Of course, according to the Government and The Sun and The Daily Mail, all existing problems will be due to immigrants (and Muslims). As the sociologist Nathan Combs says in his essay ‘Politics and Ontology after Brexit and Trump‘, oh sorry the link doesn’t work.

Epistemological-ness is do with Knowledge. Apart from Theresa May, no one knows what ‘Brexit’ is. And Theresa May doesn’t know either. It’s of epistemological significance that she doesn’t even believe in what she’s doing. ‘Brexit’ is thus an epistemological unknown, a known unknown unknown containing a number of other unknowns, a fetid fog of unknowing- and unknownness in which the only foghorn is the sound of Nigel ‘fucking’ Farage blaming you-know-whom. Perhaps, however, even at this very late stage, all is not lost: the Kennedy Institute has argued that ‘there is another, broadly epistemological, reason for a second referendum’, but unfortunately that link doesn’t work either.

Phenomenological. Hmm. ‘Brexit’, of course, can’t happen. It is and has always been impossible. So how will this impossible thing be realised? Current reports indicate that it’s being directed by a group of Tory MPs on Whatsapp. How will it be experienced? How will it manifest itself in our daily lives? The academic Steve Fuller reckons that “collateral damage will appear in the form of the riots in working class neighbourhoods which will take place once the non-elites who voted to leave the European Union realize that they were delivered on a plate from one set of elites to another”, but he’s a epistemologicalist so doesn’t belong in this paragraph.

Finally, just for the hell of it, because it’s a word everyone’s been bandying around in academica for the last few years, there’s the affective aspect. This explains why people voted the way they did. It also tells us how this came to happen. Millions of people felt unhappy with their lives and clever strategists played on their hate strings. As Dr Tim Haughton of the University of Birmingham explained, “The reason why the United Kingdom voted to leave the European Union can be expressed in three words: ‘Take Back Control’. The Leave side used the alluring slogan repeatedly and relentlessly whereas the Remain side never coined a simple and affective slogan”.

So, that’s it then. A complete, if brief, existential, ontological, epistemological, phenomenological and guide to Brexit, with a bit of the old affect thrown in just for good measure. I hope it’s enlightened somebody. If you feel that this whole thing was misconceived, poorly executed and has been a total waste of your fucking time, I know exactly how you feel. I voted Remain.