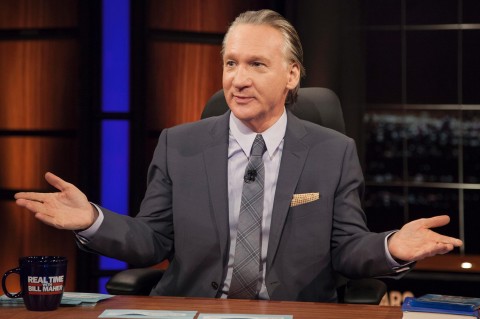 The US comedian and chatshow host Bill Maher has been on the rant about Islam again, saying that it needs a ‘reformation’. This is a common trope on the right, and Maher’s latest declarations are, as this excellent article details, just the latest in a long history of anti-Muslim statements which place him firmly on the right of the political spectrum in relation to one of the most disturbing developments of the Trump Era.

It’s typical for those caught out making crass and ill-informed generalisations about Muslims to defend themselves by arguing that their quarrel is with religious faith itself. Maher did make a documentary called ‘Religulous’ (2008), which attempts to satirise all the world’s leading religions. His show has often featured the ‘New Atheist’ Sam Harris, whose work has, since the publication of a book in which he tries to use secular beliefs to justify the use of torture, been a rallying point for islamaphobes. Thankfully, partly thanks to being articulately challenged by people like Reza Aslan, Harris recently seems to have had doubts about drinking from the same pond that outright nazis like Pamela Geller piss and bathe in, and he has spoken out forcefully against Trump’s “Muslim Ban”. The internet doesn’t work via reasoned debate, however, but by memes. On social media it rarely takes more than a short scroll down the followers lists of people quoting Harris to find proper full-on racists who also include antisemitism and white supremacy in their repertoire of photoshopped hatred. His assertion (on Maher’s show) that Islam is “the motherlode of bad ideas” has had a vigorous afterlife despite his having since sought to distance himself from his more rabid disciples. Daring to question the wisdom of Harris on Twitter is like removing the pivotal can from the bottom of a pyramid of tinned human shit.

A standard trope among those on Twitter who declare themselves ‘atheists’ is the idea that because Muslims are not a ‘race’ it is legitimate to unleash the most violent impulses against people of that faith. This belief is supported and encouraged by Maher, and may even be derived from him: he said in 2010, expressing sentiments that anyone who has spent any time on social media will recognise as those of the far-right:

“Am I a racist to feel alarmed by that? Because I am. And it’s not because of the race; it’s because of the religion. I don’t have to apologize, do I, for not wanting the Western world to be taken over by Islam in 300 years?”

Anti-Muslim prejudice is also fast becoming the Achilles’ heel of self-styled progressives. In  more than one pro-Bernie Sanders Facebook group I have seen the most horrendous far-right material being shared and commented on approvingly. Isis and their affiliates know what they’re doing in trying to eradicate basic liberal principles, and their allies on the far-right clearly appreciate the effort being made.

Harris, of course, is not a theologian. None of the New Atheists are, even their Pontiff Richard Dawkins. Terry Eagleton’s classic takedown of Dawkins in the LRB is sublime:

Dawkins speaks scoffingly of a personal God, as though it were entirely obvious exactly what this might mean. He seems to imagine God, if not exactly with a white beard, then at least as some kind of chap, however supersized. He asks how this chap can speak to billions of people simultaneously, which is rather like wondering why, if Tony Blair is an octopus, he has only two arms. For Judeo-Christianity, God is not a person in the sense that Al Gore arguably is. Nor is he a principle, an entity, or ‘existent’: in one sense of that word it would be perfectly coherent for religious types to claim that God does not in fact exist. He is, rather, the condition of possibility of any entity whatsoever, including ourselves. He is the answer to why there is something rather than nothing. God and the universe do not add up to two, any more than my envy and my left foot constitute a pair of objects.

While Dawkin’s mischaracterisation of religious faith is seemingly based on a Sunday school understanding, adult faith is infinitely far more profound and complex. I was inititally attracted by the work of Dawkins and Harris, but I quickly lost faith in such a simplistic and deterministic view of human affairs and became curious about other ways of thinking and praying. I can see a great deal of sense in Kierkegaard’s line about the function of prayer being not to influence God, but rather to change the nature of the one who prays. I also identified with William James’ notion of a ‘will to believe‘ – what is (for example) confidence in ourselves but a form of faith? Several years ago I started attending Quakers meetings. I wanted to develop a commitment to making the world a better place which was not rooted in rage and resentment and to seek communion with others in a spirit of shared compassion and reflection rather than kneejerk condemnation.

I also wanted to have an area of my life which is not conditioned by the ideology of selfishness and social darwinism that Dawkins – with very great eloquence – espouses. I wanted to try (pace James) to develop a conscious faith as opposed to being controlled by assumptions and impulses that I don’t understand or control or often even recognise.

Blind faith and superstition play a huge role in our lives. Our entire way of life is sustained by a set of unquestioned assumptions, whether that be in the supremacy of the market, the integrity of a sports team or the primacy of our nation state. All of the above are affirmed in rituals of consumption, fanship and symbolic allegiance which are entirely irrational and often intimately related to discrimination and violence in the form of the dispossession and/or humiliation of others. We also suffer greatly from a vague and largely unexamined notion that somehow ‘technology’ (in some ways a metonym for the global market) will somehow liberate us from environmental pressures, that staring at our smartphones will redeem us from reality, that this peculiarly narcissistic medium will save us from nature’s revenge.

You also don’t need to be a theologian to see that the popularity of Dawkin’s book at the same time as the West’s attack on Iraq was no concidence. It’s not by chance that an culture of intellectually tearing apart the Koran appeared just as agents of a supposedly more rationally-based societies were systematically destroying one of the oldest civilisations on earth. Dawkin’s work also raises issues of privilege and complacency: the belief that the world is simply the way it should be, that the distribution of wealth and life chances has been ordained according to logic and science and that faith in something greater is therefore ‘unnecessary’. This is a return to late-19th century positivism at its most arrogant. That does not imply that all those taken in by the arguments of Dawkins et al are guilty of racism. However, anyone doubting the link between New Atheism and Trump’s attempts to exclude Muslims from the United States would be well advised to watch this video, gleefully retweeted by Dawkins in 2015. It also suggests that his attitude to feminism is not all that far removed from that of either his many bigoted followers or, for that matter, Islamic fundamentalists.

Interventions like Maher’s make such stuff respectable among an audience that likes to think of itself as progressive. This is not, after all, a theoretical intellectual debate taking place in a vacuum. It primes them to accept further abuse of Muslims by a Government they should in theory have no affinity with and draws them into the sphere and influence of the far-right.

In saying all this I want to be clear that I am aware of the stultifying and repressive nature of religious belief, particularly when organised into hierarchical and bureaucratic institutions allied with terrestrial power structures. Religious beliefs have also been exploited throughout history by Buddhists, Christians, Muslims and everyone else under the sun to pursue psychotic murderous agendas. Anyone wanting to argue that Islam was uniquely prone to violence and destruction would have to point to a continuous history of such violence in Muslim societies over the last 1,400 years. Nor is there anything particularly distinct about Islam’s treatment of women. From Northern Nigeria to Central America and from West Virginia to East Africa, barbaric manifestations of both Christianity and Islam seek to control women’s fertility. The Misogynist-in-Chief himself is an odd kind of Christian, one who apparently doesn’t believe he’s accountable to God for his moral actions. He’s not a good advert for such a belief. The presence in his administration of figures like Mike Pomeo and Betsy DeVos, both of whom actually welcome the ‘Apocalypse’, should be a screaming red alert for liberals. For American progressives to think that such problems (and their political priorities) lie elsewhere right now is bizarre.

Comedians don’t make for good political leaders, any more than primetime ‘billionaires’ do. Michel Houellebeqc was prescient in making the main character in ‘The Possibility of an Island’ a Doug Stanhope-type comic who becomes a cult leader. Charlie Brooker predicted something similar in ‘Black Mirror’. Both could well have been predicting the Italian agitatore-in-capo Beppe Grillo. The world is awash in comedians-turned-political-preachers urging their audiences to question all authority! – except their own authority as narcissistic/megalomaniac white men making the most of their God-given right to be listened to.

Even among comics, there are better role models. Louis CK’s personal campaign against Trump was heartfelt and humble and didn’t entail his putting himself forward as an alternative. His views on religious faith allow for a certain ambivalent respect in relation to others’ beliefs:

“I’m not religious. I don’t know if there’s a God. That’s all I can say, honestly, is “I don’t know.” Some people think that they know that there isn’t. That’s a weird thing to think you can know. “Yeah, there’s no God.” Are you sure? “Yeah, no, there’s no God.” How do you know? “Cause I didn’t see Him.” There’s a vast universe! You can see for about 100 yards — when there’s not a building in the way. How could you possibly… Did you look everywhere? Did you look in the downstairs bathroom? Where did you look so far? “No, I didn’t see Him yet.” I haven’t seen 12 Years a Slave yet; it doesn’t mean it doesn’t exist. I’m just waiting until it comes on cable.”

Then there’s Russell Brand, who, burnt by the failure of his highfalutin political pretensions, is now educating himself on the subject of religion and global politics (and sharing what he learns here). Perhaps Maher should do something similar. Or maybe it’s time for him to be retired before his constant and deliberate flirting with far-right ideas does any more damage.