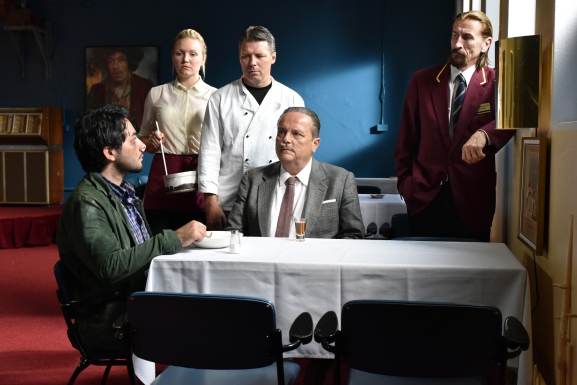 How often do you go to the cinema? Probably about six or seven times a day, right? I mean, I’m guessing, but I calculate that someone like you has, over the last, say, four months, likely seen in the region of a thousand films at the cinema, or movies at the moving picture theater if that’s your preference. Until last Saturday we hadn’t been to the cinema in FIVE MONTHS. This is because in January we became the first people in history to have an actual baby. We soon discovered that childrearing and filmbuffery are deeply and highly incompatible. To be fair, five months isn’t very long when you consider that I once met a guy who hadn’t been to see a film since 1972. The guy in question was originally from Iraq and had seven children. I can’t imagine how disruptive having seven children must be, or how hard it must be to persuade relatives to babysit*. As for the cinema, although he skipped all of Woody Allen and is presumably no expert on Kieslowski’s Red, White and Blue trilogy he must have seen a lot of Scooby Doo cartoons.

As it happens one of the protagonists of the film we went to see is also from Iraq, while the main character is from Syria. They are refugees in Finland, a country I know and love, partly through the films of Aki Kaurismaki, of which this is one. It’s the second in a row about people seeking asylum, after Le Havre (2011). Khaled has arrived in Helsinki by default after the traditionally tortuous route via southern Europe and is trying to track down his sister, from whom he became separated along the way. When his application is refused (the Government has decided that his hometown of Aleppo is a safe place to return him to) he escapes from the detention centre and is taken in by the owner of a comically-failing restaurant.

Kaurismaki’s aesthetic is one of out-of-time-ness. In his films pretty much everything is worn and familiar: the actors, the sets, the clothes and the music are all reassuringly dated. His characters are themselves refugees from a world that no longer quite exists, seeking asylum from disappointment in drink, music and small, awkward acts of solidarity. It’s a world of flawed but decent people: terse but charming, brusque and gauche but capable of tenderness. This film also features intrusions of almost cartoon-like evil in the form of some racist skinheads and also official indifference. It’s the kind of film which would piss off Slavoj Žižek, in that it shows refugees as individual human beings complete with hopes and vulnerabilities just like anyone else.

The cinema we went to (the Madison, on Via Chiabrera) is not far from our flat. Not just the cinema itself but also the street itself feels familiar and homely, with a refreshing absence of international brands and cash-for-gold shops. The gelataria we pop into on the way is a very Kaurismaki place, with its staff, fittings and menu seemingly not changed since the ’70s. There was another closer cinema, within five minutes’ walk from where we live, but in some apparently dodgy deal it’s currently being transformed into ‘international standard’ apartments.

Walking along Viale Marconi after the bridge we passed the spot where I recently got talking to a guy from Benin City in Nigeria who was sweeping the street in return for spare change. This is a phenomenon that seems to have started in Milan and has now spread to Rome. Back home he had been a musician; he showed me on his phone the video he’d put on Youtube. It was very professionally produced and really rather good. I was at first inspired to write a piece about him, then thought again: what right do I have, really, to exploit his life story for my own means? I just so happened that a few days later I was in the British Museum, one of whose greatest treasures is the Benin Bronzes. Maybe if I was a proper writer I’d  feel more comfortable about appropriating someone else’s narrative, displaying it as though it were my own**.

I hope he somehow manages to make his way upwards, whether socially or geographically (he wanted to reach London, where he had friends). I hope he manages to stay free. Kaurismaki’s film is a heartbreaking but salutary reminder that pretty much every town and city in the world contains a hidden population of people living in dread of being picked up and sent back to somewhere which can no longer be called home. When we first started coming to Rome I read a series of novels by Amara Lakhous about the local population of Arabs and North Africans whose lives revolve around the acquisition and renewal of their permesso di sogiorno (residence permit). Networks of volunteers which provide food, shelter and advice are continually turfed out and have their resources confiscated by the local authorities. My city and yours have invisible portals leading straight to war and immense danger. It puts things like not having been to the cinema for a while or not being able to find decent hummus into some perspective.

Our daughter was born here in Rome, on January 30th this year. She’s an immigrant from some other celestial realm and has been given asylum in this one. The locals coo at her, welcoming her into their world. No one tells her that Europe is full, that public services are overstretched and that she should go back home. Like any human, she has a right to be here. She’s just now beginning to recognise other people (and even stating to laugh at herself in the mirror). She shows no sign of being able to discriminate between people who happen to have been born in different places from her. As the song says, such things have to be carefully taught.

*As this episode of ‘Thinking Allowed’ discusses and my own experiences attest, Italian society would fall apart in about ten minutes without i nonni.

**There’s also the aspect of potentially revealing to his friends (and fans?) back home that he’s sweeping the streets rather than pursuing stardom.