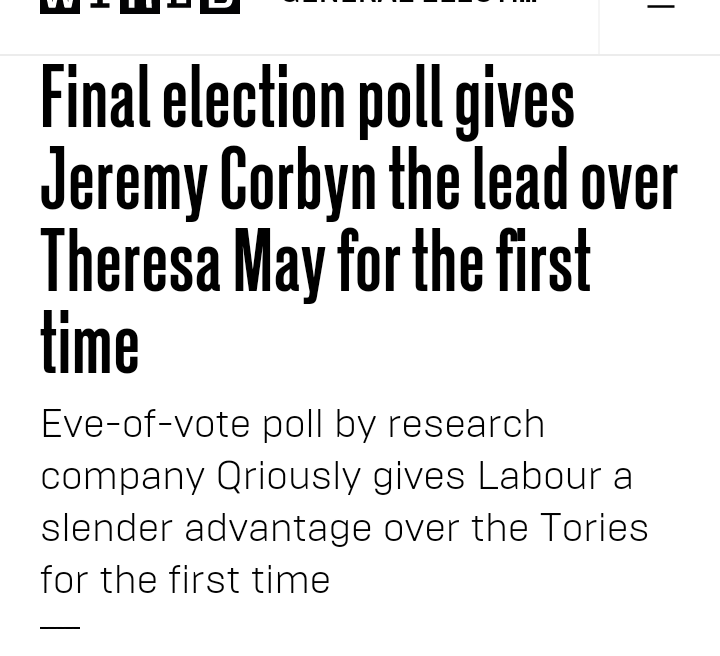 The result is not final, but it’s never been in any doubt: Labour is set to win the General Election with a massive landslide. All the latest reports say so: the ones from The Canary, something someone posted on Facebook, and a tweet I saw which had more than 300 likes…

If only reality was determined by wishes. In a way, it is. The market decides what sort of media we have access to. The most popular newspapers in the UK are The Daily Mail and The Sun. They tell their readers what they want to hear, which just happens to be line with the interests and opinions of their owners. When it comes to elections their voices are by far the loudest.

What about those of us with a different worldview, who can see through Sun and Mail headlines, who are aware of the manipulation inherent in private media ownership? Is our only option to believe whatever wildly optimistic/wilfully misleading information pops up on our timelines and newsfeeds?

Thankfully, no, it isn’t. In the UK, around Europe and in the US there is a free press which tries to represent reality according to a shared set of values, practices and guidelines. Does that mean we should have blind faith in whatever reporters and columnists for the Guardian, the New Statesman or other progressive publications have to tell us? No, it doesn’t. We need to read with a critical eye, bearing in mind such issues as bias and omission, questioning and arguing back where necessary.

What about ignoring the ‘Mainstream Media’ has to say altogether? That’s what the Donald Trumps of this world would love us to do. He fingers reponsible publications as the ‘public enemy’, instructing his followers not a believe a word of anything critical written about him. His approach is rather like that of politicians in countries like Mexico, where reporters are regularly murdered for investigating and seeking to expose the corruption of the rich and powerful.

The other reason we have to have critical trust in what the liberal media reports is that the majority of what’s reported has a far more than casual relationship with the truth. And if you want to understand what’s going on in the world you need to have some sort access to facts. This election has shown up the consequences of rejecting what the ‘MSM’ says and believing in whatever you come across on yoir newsfeed. The news that social media sites target you with is not based on an understanding of what you as a citizen need to be aware of, but what they understand that you would like to be true. That’s why your timeline is full of stories stating confidently that Jeremy Corbyn is going to win. In reality – and I know this because I read a range of news sources and they all agree on this basic point – Labour is facing a catastrophe. That is a stark fact. The only reason it should be a surprise to you this evening when the first exit polls announce that Labour has been swept away across the board is if you haven’t been paying attention to reality, but rather choosing to believe a version of it which is based on far more sophisticated -and seductive means of manipulation than anything the traditional media can come up with.

There’s a way in which all of this is even more important and more tragic than this particular election. The earth’s climate is collapsing, and yet most of the world’s population are not aware of the most basic facts regarding the causes and consequences of the problem. The most powerful man in the world, the person who by definition has more access to more reliable information than any other, believes that it is a hoax. And how is it that someone who should in theory be extremely well-informed is in practice so dumb? Well, in his own words:

Let’s be better than Trump. Fuck The Canary and all the other cynical, market-driven clickbait fake news outlets, which profit by monetising and thereby devaluing genuine hope. Read what proper journalists have found out instead. This is a good place to start. Like the old joke about asking a farmer for directions has it (‘I wouldn’t start from here…’), if we want to move forward, we need to know where we are right now, not pretend we’re somewhere else entirely. Dreaming is essential: we must shift the boundaries of what is considered possible and reject the depressing mantra that grey neoliberal sludge with a side order of potential fascism is the only dish on offer. But our dreaming must be lucid, allowing us to distinguish pure Disney fantasy from actual verifiable facts. Above all, we need to have a grasp on reality if we’re serious about wanting to transform it.

P.s. I would be obviously ecstatic if thanks to some miracle it turned out that me and every proper news outlet were wrong about this. I’ve been through far too many elections to get my hopes up, especially on the basis of so little convincing evidence. Fuck the Tories. UPDATE: I am very happy to have been proven slightly wrong. Fuck the Tories AND the DUP.