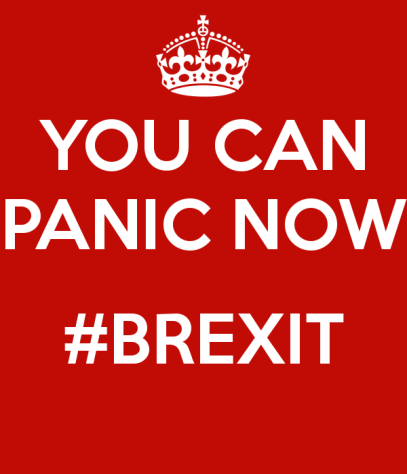 There’s a thread on Reddit called “Why aren’t the Brits panicking?”. It was presumably started by someone from the States, given their choice of epithet. It’s certainly not a word I’d use to describe myself, what with its uncomfortable evocation of tabloids and expattery. I saw some right-wing troll (or, more probably, bot) on Twitter using the term ‘Britons’ in relation to Brexit, suggesting that his normative understanding of British identity draws on a mythical idea of pre-Roman/Norman/Windrush purity without jollof rice or vaccines.

Nonetheless, it’s a fair question. I’m a ‘Brit’, if you like, and I don’t appear to be panicking, despite the fact that in three weeks’ time there may be troops on the streets to quell potential food riots, and all sorts of infrastructures whose existence, let alone importance, I have remained blissfully aware of all my life could collapse overnight. (The amount of unknown unknowns is, inevitably, unknowable.) If there’s a glimmer of sanity in Theresa May’s head that scenario won’t quite come to pass (yet), but if so we can be sure that Nigel Farage and Tommy Robinson will be doing all they can to spark an immediate civil war and (in Farage’s case) will be given plentiful access to the airwaves to do so.

Philip K. Dick wrote that sometimes it is an appropriate response to reality to go insane, and this would appear to be an opportune moment to do so, except for the fact that people all around the world are very noticeably not panicking about rapidly rising temperatures or the return of the far-right to power in some of the world’s most powerful countries, which might give us pause to think: how do we “panic” if no one else seems to be doing so? Perhaps I am panicking without quite being aware of it. After all, we already have food stored under the bed and precautionary plane tickets booked for the end of the month. And yet, in the meantime, we still need to eat, sleep, see friends, take the baby to the park, go to work; there are Michael Jackson documentaries to watch, and subsequent arguments to pursue online with people who (mystifyingly) refuse to accept the facts; there are articles to read which reflect intelligently on how we should react to the final evidence of Jackson’s corruption: should we continue to play his music? Write it and him out of history? And yet, it’s been a central element in our shared emotional life. More, one might even say, then the European Union…

So what’s a reasonable reaction to news that shakes the ground on which one stands? It may be rational to panic, to scream and run away, but where do we run to? It is, in the words of this article, “easier not to believe” such terrifying truths, especially when, away from social media, so few people seem to be even slightly perturbed by what’s happening. Maybe our sense of how to behave is akin to how we construct our identities: in the words of the sociologist Charles Cooley, “I am not who you think I am; I am not who I think I am; I am who I think you think I am”. The reason that British people are not panicking is partly that other British people are not panicking. After all, not panicking is what we’ve all been doing on a wider scale in relation to even more terrifying news about our climate.

No amount of frozen metaphors about frogs in boiling water or memes of dogs in burning rooms can begin to do justice to our failure to respond adequately to collective existential threats. Michel Foucault talked about how power operates through a shifting process of normalisation, where even the most radical changes to our daily lives can be incorporated into our picture of the world, while Pierre Bourdieu developed the concept of habitus, according to which it’s practically impossible for us to think beyond the parameters of our working assumptions about our lives and our reality. Not only do we live in an environment saturated with reassuring messages about the future, we live, speak and breathe those messages, reproducing them in our thoughts, posts, conversations and actions. We see adverts for events that take place in April, May and beyond, myriad timescales which take no notice of March 29th, market imperatives that must supersede whatever happens in news headlines, just as everyday life and consumption has so far managed to outlive any number of terrorist atrocities or climate catastrophes in cities we visited just a few weeks or months before and just as the global market was able to incorporate the election of Trump, Bolsonaro and Salvini with nary a blink. When we were considering what to do at the end of March and trying to make plans for the following month, I made the following suggestion: Imagine we know there’s going to be a hurricane or a flood, one whole scale we can’t predict until just before it happens. But perhaps a better analogy, given that Brexit is first and foremost an ideological project, is a terrorist attack way beyond anything Isis could dream up; given the nature of such attacks, we don’t know whether it will hit the particular station or square we happen to be passing through, but it won’t stop us travelling or holidaying or going to work or shopping – although actually, you might want to strike that last one off the list, and the first and second come to think of it. As for our jobs… Dostoevsky wrote somewhere that the greatest strength and weakness of human beings is that we can adapt to any set of circumstances; post-modern society thrives on disruption, according to any number of Ted Talks. The statement that it’s easier to imagine the end of the world than the end of capitalism has been attributed to everyone from Frederic Jameson to Slavoj Žižek to (I seem to recall) Peter Andre. In such a setting it’s impossible to overcome the sensation that, as Thomas Pynchon puts it in ‘Against the Day’, “there will always be time”.

But perhaps, in the end, Brexit is not the cause of the (apparent absence of) panic, but rather its consequence. Maybe panic is setting in at the level of politics, and that’s what Brexit, much like Trump, Salvini et al, is an effect of. Maybe for many people the notion that their decision has somehow had an impact on world events serves to assuage the sense of doom and helplessness they feel in their daily lives.

In the meantime, then: Michael Jackson. I’m writing this in an airport. All around me people are going on with their lives: chatting, sipping coffee, unfolding pushchairs, tapping out sanctimonious diatribes about other people’s complacency on their devices. It’s soundtracked at this moment by some Motown classic which might be called ‘I believe you’. If I sit here long enough I’m sure to hear one of the totems of our culture: maybe ‘ABC’, ‘Rock with you’ (one of my personal favourites) or maybe (possibly, apart from the pedophilia, his nadir) ‘They don’t really care about us’. On the way into the terminal I saw a young woman wearing the same jacket Melania Trump when she went to sneer at terrified children ripped away fron their parents: ‘I DON’T REALLY CARE, DO YOU?’. I briefly thought about remonstrating with her, but didn’t want to create a scene. Which raises the question: how does one show that one cares? And related to that: what does it mean to panic? Maybe initiatives such as this and this can help us to, to borrow a phrase, take back control of our fears and frustrations in a way that’s doesn’t involve lashing out at conveniently-placed scapegoats.

Update: Someone on Reddit responded to this piece by accusing its writer (me) of being ‘ill-informed’, ‘stupid’ and ‘apathetic’. Here is another version written especially for him:

Having posted to his blog yet another diatribe about how Other People’s inertia, apathy, laziness, complacency, cowardice, greed, ignorance and selfishness were responsible for austerity, Brexit, Trump, Salvini, Climate Change and so on, and how it was not just incumbent upon Other People but actually pressing, urgent (and some or other synonym for those previous two words) for those aforesaid Other People to take action up to and including risking their personal relationships, livelihoods, freedom and physical safety to stop, overthrow and/or prevent those things, there really was no higher priority for Other People than that as it was a matter not just of principle but also of survival, so basically why weren’t Other People panicking or revolting, what was wrong with those Other People, like were they all fucking stupid or mad or evil or something like that, having typed all that, chosen a fitting image, selected some appropriate tags and clicked Upload, he caught the train to St. Albans, took a wander round the local gallery/museum and perused the street market, stopped for lunch in a pleasant café before visiting the cathedral and graffitiing the words ‘YES, WE ARE ALL TO SOME EXTENT APATHETIC AND COMPLACENT IN THE FACE OF SUCH TERRIFYING THREATS AND HORRIFYING REVELATIONS, WE TEND TO DENY OUR OWN ROLE IN QUIETLY ALLOWING ABUSE TO BE PERPETRATED, THAT’S KIND OF THE POINT’ on the walls of the 13th century crypt, and then catching the train back to London to spend the rest of the day reading a book about climate change denial, eating the remains of the curry he and his wife had ordered off Just Eat the previous evening and watching the rest of the Michael Jackson documentary.